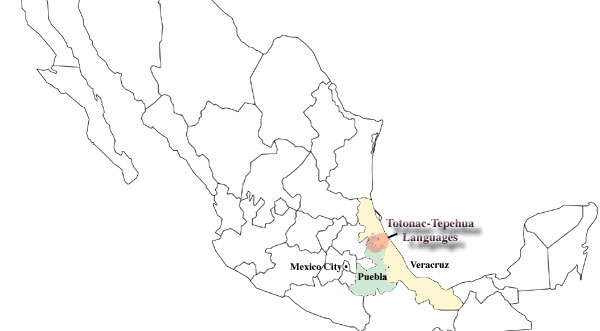 The Totonacan family (a.k.a. Totonac-Tepehua) constitutes one of the largest language families in Mesoamerica, reported to have approximately 240,000 speakers by the Mexican census in 2005. Totonacan languages are spoken in east-central Mexico in the states of Hidalgo, Puebla, and northern Veracruz. Evidence suggests the Totonacan languages are related to the Mixe-Zoque family, another large linguistic group in Mesoamerica, forming a larger super-family, Totozoquean (Brown et al. 2011).

The family has two distinct branches, Totonac and Tepehua. Within the Totonacan branch, there is another clear division between Misantla and Central Totonac. Beyond that, little is known about internal genetic relations within the family or the actual number of distinct Totonac languages. Recent work from our project (Moore 2017; Beck to appear) suggests the following groupings: