“It’s not important for them to speak Spanish to each other if they know Totonac. The ones who know, who know how to speak in my language, well I don’t speak to them in Spanish because I know they understand me. If they answer back in Spanish, well, that’s up to them but I’m speaking to them in Totonac. Yeah, I won’t speak in Spanish to those that know my language. Yeah, because like I say it’s important to speak our language… so it won’t be lost.” 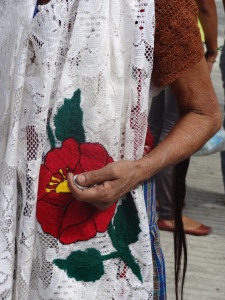 The Language: Upper Necaxa Totonac
• Spoken in the villages of Chicontla, Patla, San Pedro, and Cacahuatlán.
• 3,400 speakers out of a population of around 7,000 in the valley.
• Only a few monolinguals.
• In Chicontla, most fluent speakers are in their forties or older.
• Patla has younger speakers, but only a handful of families have Totonac-dominant children.
• Although many fluent speakers are (or were recently) of child-rearing age, many of them deliberately choose not to speak to their children in Totonac.

“I’ve spoken to [my children] in Spanish since they were small, that’s why they barely know [Totonac]. No, I didn’t like to speak to them in Totonac. But now I want them to know because … I mean, I could have taught them when they were young, and now you see they don’t like it, or maybe they want to speak it but they can’t. Mm. And it seems that I did a bad thing not telling them to speak like that [in Totonac].” 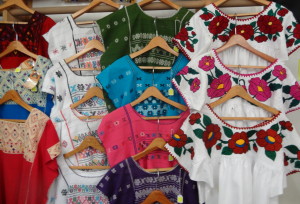 “Lots of people are ashamed of speaking Totonac, they’re ashamed, they say “I don’t want to show that I speak it because of the sophisticated people [in the village],” they don’t want these guys to see their face because they speak Totonac, they’re ashamed … the thing is, there are people that don’t value it, they don’t appreciate it, what you would call their heritage, what we’ve received from our grandfathers, eh?” 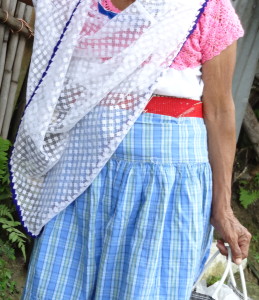 Society
• The language is associated with hard times, difficult living conditions and marginalization.
• Spanish is the language of religion, education, television, and technology (prestige).

Economy
• The local economy has shifted from subsistence farming to cash crops sold to outsiders.
• As coffee prices have fallen, young people leave to find work in Mexico City and the U.S.

“I spoke to all of [my children] in Spanish from the time they were born because, well, I thought it would be better if they weren’t like me, I learned when I was older, I don’t want them to be like that, my children, I want them to speak Spanish …[but the first and] the second were the same, he started to speak Totonac. …I said to them, why don’t you answer me the way I talk to you? And they answered in Totonac. …At times I would scold them …They understood what I was saying to them, but they would just answer me that way. Until the third child came along, this one, the youngest, and the first words he said were in Spanish. Now I was happy because my child now, my baby, now he was starting to speak in Spanish.”

Thanks to Guadalupe, Gaspar, Catalina, and Amalia for their participation in this project, and to Dr. Yvonne Lam (MLCS) and Lilian Perezcruz Pintos for providing the interviews and transcriptions used in these pages.