In a traditional home, almost everything was decorated. Rushnyky hung on the walls. Walls were sometimes painted. It was most common to paint flowers around doors and windows. When a woman married and moved into her husband’s home, she took a skrynia with her. The skrynia is a large wooden chest which was used to store the clothes and the decorated linens that they bride had made. The skrynia itself was painted with floral and other designs.
Dishes and utensils were decorated. Western Ukraine is known for highly decorated and colourful ceramics. The collection of decorated ceramics put together by the Kunda family can be found below. The items were photographed in 3-D and are rotatable.

Ceramics from the Collection of Andrij Kunda

These ceramics were video photographed by Nadya Foty and Mariya Lesiv in 2007 at the home of Andrij Kunda, Calgary, Alberta, CANADA.
Most of the ceramics are from the Hutsul village of Pistyn’, which presently belongs to the Kosiv raion in the Ivano-Frankivs’k oblast’ in Ukraine.
These objects were made prior to WWII and were brought to Canada after the war.

The videos were processed by Genia Boivin and Peter W. Holloway.

Click on one to turn it, then return to the pictures by touching “back” or <-

Men would decorate the outsides of houses. Vasyl Latysh snipped tin to give his house this fancy decorated edge.
Yards are surrounded by fences and the fences can be quite fancy. Gates, the entrance to the yard, are decorated, often with paintings of scenes. Favourite scenes include animals in the forest, scenes of courtship showing young women and young men, and pictures of a woman or women against a beautiful landscape.
Woodworking is also prized. 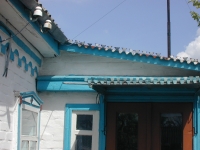 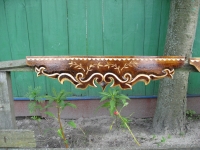 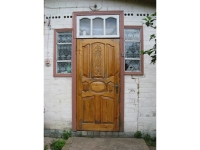 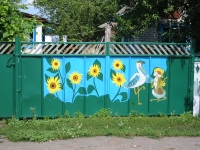 Decoration on things that are utilitarian – things that are used – is usually called craft. This means that embroidery on a blouse or a shirt or other item of clothing would be called a craft. A rushnyk is ambiguous. Though the word “rushnyk” means “towel”, these items are not used to wipe one’s hands or to dry the dishes. They hang on wall as decoration.
While rushnyky are not utilitarian in the sense that they are used to wipe things, they are not just pretty decorations. They have a ritual purpose and a magical purpose. Rushnyky protect the bride during the wedding process. They bring the couple together during the church ceremony and make sure that the man and woman stay married. In the home, they protect the home and the people who live in it. They bring blessings and prosperity, good crops and many children.
Both women and men would make toys for children and older children would make toys themselves. Dolls are very popular. In the past, when people were very poor, the only dolls that people could afford were made out of cloth or a combination of wood or rolled-up bark and cloth. Now people have store-bought dolls for which they make fancy clothing.

Dolls made out of cloth are called motanky. Like rushnyky, they had a magical purpose as well as a mundane or everyday one. Dolls are toys and keep children entertained. They are also believed to protect children, especially from the evil eye and disease. Dolls are made without faces or with faces that have coloured string wound in the shape of a cross. Because it has no face, the doll is believed to be able to take on any identity. This means that it can fool a bad spirit who will mistake the doll for the child and cast a disease on the doll instead of its intended victim. The child is safe and the doll is burned. In some places motanky dolls were made for weddings and were said to work the same way as dolls that protect a child from disease. It was feared that people jealous of the couple might cast the evil eye on them. This could happen intentionally. And it could happen unintentionally – someone might cast the evil eye and jinx the couple without meaning to. Dolls used at weddings would absorb the bad spell and protect the couple.

Poor families in Ukraine did not have money to buy dolls for their children so they, or the children, made their own dolls.
They used bits of cloth or bits of yarn (wool) to make the dolls and then dressed the dolls in clothes made from other bits of cloth.
Here you see the steps to make dolls from yarn.
First we make the boy doll, and make a braid which will connect to the girl doll.

Next the girls doll is made and she is given a hair braid. Then she is joined to the boy with his long braid.

The body can also be made with heavy cloth. Two squares of heavy cloth are cut (one 24 cm square, the other 12 cm square).

The body can be dressed either as a girl or a boy. For the boy, the legs should be pulled slightly sideways and secured by stitching through the cloth.

The body can also be made with a tube. Traditionally, this type of doll was built on a tube made of birch-bark; we will use a rolled-up tube of paper: approximately 2.5 cm wide and 9.5 cm long, held with tape. It is covered with a square of cloth approximately 24 cm square.