Footbridge crossing the river in Patla. 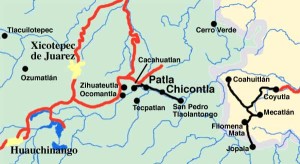 Upper Necaxa Totonac is spoken in the communities of Patla, Chicontla, Cacahuatlan, and San Pedro Tlaolantongo in the municipality of Jopala in the Sierra Norte of Puebla State. Located in the Necaxa River Valley, these communities are bordered to the north, east, and west by speakers of other Totonac varieties and to the south by speakers of Nahautl. The nearest urban centre is Xicotepec de Juárez, a town of about 40,000 people an hour away by local transport. 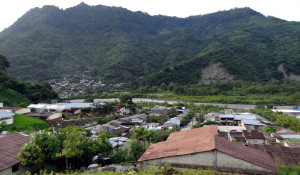 The community of Patla, looking north,

Most Upper Necaxa speakers live in Patla and Chicontla, though a few hundred speakers also live in Cacahuatlán and San Pedro Tlaolantongo. There are some notable dialect differences among the four villages. Speakers readily identify each other’s origins based on lexical choices and variant pronunciations. Cacahuatlán is said to have been settled by people from Patla and so their speech is more Pateco, while San Pedro has been influenced by other Totonacan languages to the east and south. Spanish is generally used in the presence of people from outside the community, even people from other Totonac communities. 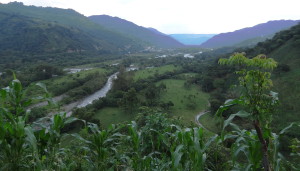 The terrain surrounding the Necaxa Valley is spectacular, featuring high, steep cliffs and deep, narrow river gorges. Some of the peaks in the area rise over 1,500 m., but the Upper Necaxa villages themselves sit on the valley floor at only 260 m. above sea-level. The differences in altitude result in stark contrasts in climate. The lower altitudes have a hot, humid costal climate with average day time temperatures in the 30s, while the higher areas to the west around Xicotepec have cooler weather and frequently experience dense fogs and temperatures below 20 degrees.

View of the mountains on the ride from Xicotepec de Juarez to Patla and Chicontla.