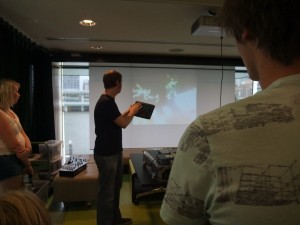 The Edge is a $7.9M cornerstone of the Queensland Government’s arts culture + me Children and Young People in Arts Action Plan 2008–2011.      This public set of digital recording, editing studios, display bays and soundstage/auditorium  enables both hands-on teaching, individual and group activities and informal discussion of the creation of all sorts of art and technology, research, training, mentoring and being mentored, networking, and entertaining and being entertained.  The Edge fosters a sense of community, a commitment to collaboration and a spirit of openness.

Brisbane seems overflowing with an interest in digital initiatives and an interest in creative industries.  I was on a lecture tour funded by the Creative Suburbia research network and symposium, some of whose principal investigators are based at Queensland University of Technology. 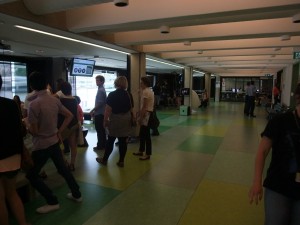 What we see in these images is a simple set of 3 bays with ceiling mounted digital projectors and mobile equipment: a “Catalyst” (an animator) has a cart of VJing equipment (photo above: a Macbook Pro runs OSC, Resolume, Programming, VDMX, and CS4  AfterFX, tied in with a VJX16-4 Videomixer, a Kaospad, while the iPad offers hand-held bluetooth control of OSC.  The mixers on the couch are unused); in another space Nintendo type dance pads are out on the floor.  At the far end is a digital editing studio with about 12 iMacs, and (not in picture) professional sound and video editing suite.

“Residents” have included Chris Meade, a Director of if:Book (Institute for the Future of the Book, London UK), which provided Dick Higgins “Map of the Internet in a previous post.   Chris’ interview with The Edge on the future of publishing is here.   The question for me is how could this facility and approach  be used to work with visualizations which clarify social issues, problems and inequalities – housing squalor caught on Google Streetview, graphing and animating graphs of poverty rates, perhaps Google Maps…  Post your revolations.