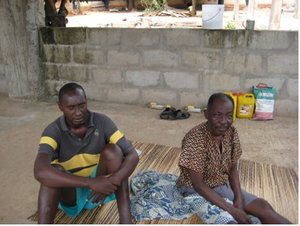 Both Wisdom and Patrick were sitting in the shrine when they invited me to talk with them. Patrick is Wisdom’s son. I asked them both if they played any instruments. Wisdom plays the long tall drum, and Patrick plays the gankogui. They both learned how to play traditional music at home from their grandparents, and they both said that all of the songs that they learned when they were young are still played today. According to them none of the traditional music has been lost. Wisdom said that traditional music is constant in the village, and going to the city just helps you appreciate the village more because it hasn’t been so caught up in popular culture. They both felt strongly that the shrine has helped to uphold traditional values in the village.