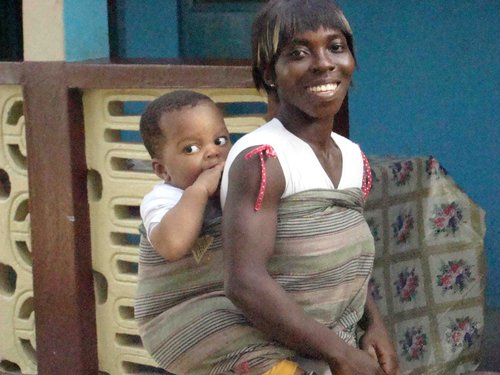 Q: What is the biggest change you have seen in your village over the past two decades?

Mavis: The biggest change I have seen is in the youth. When I was a young girl, boys would have to wear traditional robes when they went to funerals and to the shrine. Nowadays, they mostly wear what they want. For instance jeans, or shorts and a t-shirt. Sometimes they will wear a wrap around their waist, but usually with a t-shirt or pants over top. When I was younger they would wear the full robe that went over the chest and around the neck. You wouldn't get away with having any other clothes on with the robe.

Q: Why do you think that has changed?

Mavis: I think because children don't really see the point anymore.. They can't be bothered to wear the traditional dress. If one person disobeys, then other kids question their parents, asking "why should I have to get dressed up?" so and so doesn't have to... And before you know it, more and more kids don't seem to care. The younger kids see the older kids disobeying, and they look up to the bigger kids. The older kids' actions affect the younger kids.

Q: Has technology had an effect on people in the Village in the past decade?

Mavis: Yes very much. Mostly with the younger generation. The elders are not very interested.

Q: What kind of technology has had an effect on the youths ?

Mavis: Television, radio, computers, and cellphones. Television has become more popular now that we have three more stations. There are five television stations. This is a good thing. There are a lot of programs about history and other learning programs. The radio plays really good music like reggae, popular music, and high-life. There are also programs for parents, that come after the kids go to bed. These programs are about building and maintaining a healthy relationship. There are programs about having a healty sex life. This is good for young people who are newly married. Many marriages don't work because each partner wants different things. These programs discuss ways to deal with problems. Computers are very new, as well as the internet. I'm not very familiar with these things yet. Everyone has a cell phone, and I guess thats a good thing.

Q: Can you tell me about music traditions you grew up with?

Mavis: My mother taught me the dances and we learned others in school. We used to perform them for the elders, and at other festivals. Dances like the Kpanlogo, Ziggy. and other traditional Ewe dances. The dances were a lot of fun to learn and it is great to see you students learn them. There was also a tradition called "By the Fireside". Its when all the kids would get together at night by a fire, and the grandfather would tell stories. Others would sing songs, and bring plays for us to perform. It was a great chance to be together and learn about our ancestors.

Q: Do you see these traditions at risk of dying off?

Mavis: No I don't. This is a very important part of our community and everyone loves to participate in the activities.

Q: What are your plans for the future?

Mavis: When Henry gets a bit older, I will go back to school and finish my degree in catering. I really want to see Henry get a good education and get to travel and see the rest of the world. I would love to travel some day when Henry is old enough. Right now it is really hard to raise my son. Henry is a big boy and I have to carry him on my back and it's painful at times. I have to raise him a lot on my own and this is very time-consuming. I hope to be successful in life, and its hard when I'm on my own. I hope things will become easier as my baby grows up so I can do the things that I want to do in life.