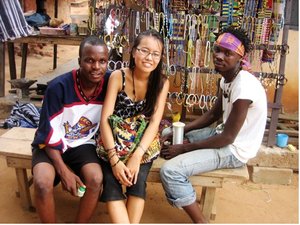 Kwabla is considered to be the only Rasta man in Dagbamete. He went out of town for Senior High School in Agricultural Sciences, but he has been living in Dagbamete for his whole life. He learnt how to make jewellery from his mom about 3 years ago, and started his own business in the village ever since his mom’s death. Kwabla already knows how to make the rattle, so the next step in his life is to learn to how to carve and make drums, for which he will acquire an apprenticeship outside of Dagbamete.

He learnt traditional music from his grandparents, through the shrine when he was growing up, and running and playing around the shrine. Kwabla likes to play traditional music at festivals, and the pieces that he is most familiar with are agbadza, adzogber, agbosu, and kenyo. His definition of festival is a celebration for the gods. So during such celebration, members of the shrine (including those outside of the village) come together and celebrate. People gather for festivals during Easter, and Yalauye (for twice a year). Both men were members of the shrine since his birth. And for all of his life, he has yet to observe new drum patterns nor rattle patterns been played in the shrine.

Kwabla and Moses both informed me that traditional music is played at the shrine, which is used to call the spirits for multiple purposes, such as healing. And the songs that the members sing are for protection. The shrine is extremely beneficial to everyone, member or non member. However, once one is a member of the shrine, the shrine can provide lifelong protection, and prosperity if one obeys the commandments. However, if one does not follow the commandments of the shrine, then one will get punishment. If one breaks the rule lightly, then there is a possibility that one will be sick. However, if it is a severe mistake (such as murder), then one’s punishment will be death; also, if one plans death upon another person, then the person who planned the death will die first.

Kwabla and Moses both informed me that people like to put their life histories into songs. When something significant and meaningful happens, composers would jot down the experience and put it in a song. Thus, there are a lot of composers in the village. Then I asked Kwabla and Moses and his friends to sing me a little song that would demonstrate what they indicated. The song meaning: Crickets like to dig holes in the tree, so if the tree is good for crickets, then they will go to that tree. So in life, whatever is good for you, then you should go for it.

Then they explained to me that this song can be applied to the relationship of this village and the shrine. Because the shrine can perform miracles, then people should go to the shrine. They told me that they learnt this song from the shrine, and most Dagbamete residents learn music and songs from the shrine. When Kwabla and Moses were young and trying to learn the songs by oral transmission in the shrine, they would always have to ask their parents for the meaning of the abstract lyrics to be able to fully understand the songs. Even right now, they still encounter songs in the shrine that they have never heard before. So, they would listen to the 1st verse, and then join in on the 2nd verse. Only specific songs are sung during time of worship in the shrine, and it is not respectful to sing those specific songs of evocation for personal entertainment. New songs are being composed all the time, but one has to learn the old songs to have a foundation to build on.

Kwabla and Moses said that almost every village has a shrine, but they might not function as properly as their shrine nor as big. People come from all over to this shrine – Kumasi, Tamale, even Benin and Togo. And the music that is played in the shrine is extremely inspirational. You believe that the spirits are watching over you and protecting you, and you believe that you will pass by all obstacles. In everyday life, during sad moments, you sing songs to remember those who have left you. However, during happy moments, you sing songs that celebrate your happiness and bring your happiness up a level.

I asked about Kwabla’s intension about being a Rasta man, and his challenges in being the only Rasta man in the village. He told me that unlike most Rastas he does not smoke marijuana, because it can cause depression in the long term, and destroy the human body. Not all Rastas are vegetarians, they eat meat too. Usually, they eat whatever is possible and good for their bodies. He likes reggae music, because there are inspirational messages in the songs that address serious issues in society. He informed me that most Rastas do not believe in politics, because you will risk yourself if you always follow politics, and it will have no direct impact on your life. In the current society, Kwabla feels that not all people understand Rastafarianism. They only associate Rastas with dread locks and marijuana, but it is so much more than that. As a Rasta, he believes that in order to achieve the good in your life, you will have to pass by many difficulties and struggles before triumph.