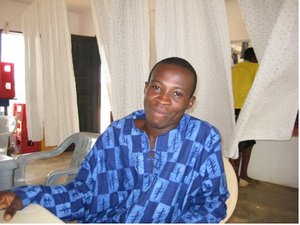 Jared Davor has lived in Dagbamete his whole life. He prepares medicine for women who have difficulty with menstruation; he learned this from his grandfather. Jared said that he sings, dances and drums but he has no specialties. When talking about the shrine he said that there is specific music for every ritual, and they often use music for the healing of sick people in the shrine as well. He learned all of the traditional music from his grandparents and said that all of the music he remembered learning is still prevalent today. Apparently music is still mostly taught in the home, not at school. When I asked him if there has been popular music influences in the village he said that the elders are quite against it so they don’t let pop music in the village much. He said when he gets the opportunity to go the city and experience new music he goes, but this is home and he will always come back to the village.

Jared grew up in Dagbamete. He learned some of the music that he knows from school but studied most of the traditional music from his grandparents. In his opinion popular music has not affected traditional music. Elders within the community do not agree with listening to popular music. He aspires to learn new styles of music but he is not specialized in any certain forms and already knows a bit of different styles. He prepares traditional medicine at the village healing center specializing in female menstruation and birth which he learnt from his grandfather. He is a member of the shrine and says that every action that is performed goes with a certain type of music. He explained that there are certain dos and don’ts of the shrine but did not give any details. The explanation of the sacrifice was that you hold an animal up in front of the priests, chief priest, and elders and they pray and sing and then that animal just dies. There are no songs for medicines but there are some for healing purposes although they aren’t common. He likes to listen to a blend of popular music and traditional music. In his opinion all of the traditional songs are unchanged. He doesn’t plan to pass on any of his knowledge of traditional music on to his children.

Q: How long have you lived in Dagbamate?
Jared: My whole life.

Q: Who taught you about traditional music in the village?
Jared: I learned most things from my grandparents

Q: Do you plan on passing on traditions and traditional music to your kids?
Jared: No

Q: Do kids learn traditional music at school or anywhere outside their household?
Jared: No, they only learn it at home.

Q: Have you studied at school or University?
Jared: Yes, I study general arts, I like to learn about other cultures but always come back to the traditional culture of the village.


Q: Where did you learn about your job with medicine?
Jared: From my Grandfather.

Q: Are you a member of the shrine? How does music affect the Shrine?
Jared: Yes…every action that happens in the Shrine, has a particular music that goes with it.

Q: How does music affect your profession as a herbalist?
Jared: There are no songs that go with my profession, I am just a herbalist.