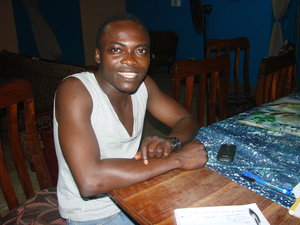 Godsway Dunyo was born and raised in Dagbamete. After finishing school, he joined a polytechnic school to study art, photography, and graphic programs. Occasionally he travels all along the coast for work.

Godsway Dunyo says that a good drummer needs creativity and natural talent, which is a gift from god. Alongside, one should be analytical and perceptive, and have the ability to watch. He also says that finding one’s talents is only possible by practicing, and it especially helps males to find their profession. Dunyo thinks that it is important to find multiple talents because it helps one to adapt. He prefers listening to local music, reggae, hip-hop and gospel on the PC and radio. According to him a shrine-drummer listens to gospel for the rhythms.


Dunyo informed me that the village has changed since he was a child. For example, it now has electricity and water. According to him electricity has had no negative impact on music but rather enabled them to use tapes, cds and have computers. He remarks, ”Recordings and electricity are promoting our culture.” Similarly, the presence of water pipes as opposed to wells that they previously used, enables people to give more time to their musical pursuits. Moreover, people today are more educated in his village; “You have more reading available through modernization” he says, and this helps in teaching students about types of music and musical instruments as well as increase appreciation for music and history. “If you don’t know something how can you do it?” Dunyo finds that learning something by reading is not opposed to that by watching, but rather a supplement. “Our authors don’t have a book whereby you can read about our local drumming music. So, you use your eyes and watch.” Videos are good for watching and learning. “Seeing is believing;” therefore to improve music in you, you must watch, hear, and practice, he says.

Dunyo finds that the influences from people traveling to the villages have had a positive impact on the youth. He says that in his youth, he didn’t know anything about other types of music. The influence of new music in the village helps to foster competition in local music. For example, on one occasion, a gospel band and traditional band had a “show” to see who was better. Without competition, there is no progress, he remarks. Therefore, for local music to progress, one has to be specific about instrumentation, and in this regard modernization and bands are good changes for local music culture. At the same time, Dunyo also considers that maintaining traditional recreational music in the village is “about unity in the community.”