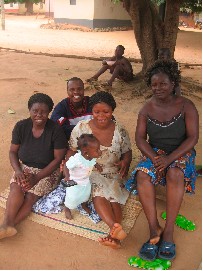 Beta, Felicia and Happy were all born in Dagbamete, and have lived in the village their entire lives. All three women said that they both sing and dance, but are never involved in drumming. When asked how they learned the music they know, the women said that most songs were taught to them in school. Before the age of 6, when children start learning music at school, most children learn some songs from their parents. The women said, however, that many of the songs they learned in school were different from those that had been taught to their parents. Many years ago, most of the songs taught were in Ewe. Now they sing songs in Twi, Ewe and English. When I asked Beta about the differences in languages used in the songs, she simply said that “some are the same, some are different.” All of the women said that they believe it is very important to learn your hometown songs before learning those from elsewhere. When I asked about the use of technology and its impact on music in the community, Beta said that once some of the locals were recorded playing drums and singing, and then were broadcast on the FM radio. When I asked whether any traditions had been lost over the years, the women became defensive and said that “we never lose songs: all songs stay.” They continued on to say that over the years many songs had been added to the local repertoire with the composition of new local songs, and more popular music coming into the village. Beta concluded saying that “composers bring new songs, but old ones are not lost.”

I asked the women a bit about females being drummers. They said although females normally sing and dance, there are some female drummers. It was difficult to discuss this topic with the women without having them become defensive. I tried to ask about the social acceptability of women drumming, but felt that most of the question was lost in the language barrier. When I asked if many years ago there were female drummers, the women simply said “yes.” I restated the question, asking if having female drummers was a recent change, and they again said “yes,” at which point a male family member who was present chimed in, saying “Didn’t you see the female drummer at the school festival? You see? Female drummers are OK.” From this experience, I had the impression that discussing the role of women in drumming may still exist as a taboo subject.