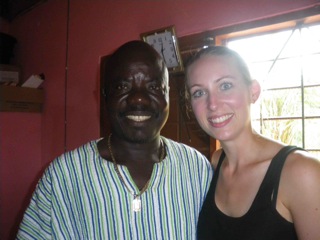 I had just finishing trying on my new Sunday dress at Angelina's seamstress shop in Dagbamete, when an exuberant man greeted Angelina as he was passing by, and then stopped in at the shop. We hadn't been in the village very long, and though I remembered the importance of greeting in Ewe culture, I had forgotten what the Ewe words were to say "Good Evening," so I resorted to English. Less authentic, yes, but at least the greeting was there. I introduced myself and then the smiling man in front of me introduced himself using his English name, Super. It was not until nearly the end of my stay at the village that I came to learn his Ewe name, which is Kwame. "How do you say 'Good Evening' in Ewe?" I asked Super. He was more than willing to answer this question and many more. Super's linked my arm with his and informing me that he lived just to the side of the Lodge that we were staying in, Super and I left Angelina's together to go and see his home and meet his family. On our short walk over to his home, Super told me that I could come and see him any time with any other language questions that I had during the course of my stay in the village. And so, the wheels were set in motion for building an authentic Dagbamete connection.


It was several days later that I sat down with Super to ask him some questions regarding his experiences with music in the village of Dagbamete. Super has lived in Dagbamete all his life and I was curious to see if music had always existed within the village. Indeed it had, but his response was an oxymoron of sorts. Though music has always been in Dagbamete, music is not always present. Simply, what Super was trying to say is that music exists within more specific parameters; "if you have occasions, you have music." When I asked him why music was important to him, he said, "for our occasions." It seems as though music is an integral component of many Ewe occasions, such as funerals and festivals. It is traditional music that is of particular importance. I asked Super, "when someone has died, is it important to play music?" His response was, "if he is a member in this community, we use music to grieve for him." Music and dance are used as a way to cry with the family, as a way to express one's sympathy, or, as Super put it, "to make a feeling for them." Everyone in the village and the community comes together and gathers for these types of occasions.


It also appears that music centers around the drummers; "if you call them, they come and drum that music for you," Super says. The people who drum are natural drummers. They were born with the ability to drum, rather than being taught how to do it; not everyone can be a drummer. When I asked Super if he was a drummer, he responded by saying, "no, me, I can't drum." Super is not a drummer, he is a dancer. Like with the drummers, Super feels that dance "is like a natural gift." He does not credit anyone with teaching him how to dance, but rather, it was a gift that was bestowed upon him and it is just something that he is able to do. His children have learned to dance by copying his movements. And, there are different types of music in the village that people dance to. Some of the "tunes" are quick, whereas some are slow. The tempos of these tunes are determining factors for the types of dances that are performed with them, as demonstrated by Super in our interview. He showed how movements can change depending on whether the music is fast or slow. Super also identified that music can change depending on context, naming a number of different shrines and identifying that "all those gods have their music."


Super was keen on sharing the music in Dagbamete and his dancing with me, inviting me to a musical event occurring that same day, an event which Super explained was "going to remember one of our brothers who has died." Though I was unable to attend this event, I was able to attend the funeral for this man which occurred a few days later. In doing so, I had the opportunity to experience first hand the music and dance in traditional Ewe funerals that Super had mentioned in our interview. It was my intention going into this interview to find out from Super how music in the village had changed over time, but he had other things that he wanted to share with me. In Canada, I feel that we view music and dance as a skill, something that takes practice and energy to master. But to Super, it appears that one is born with a "natural" gift to play music, or a "natural gift" to dance. Music and dance are an integral part of Ewe culture; they exist when you are born and they are there when you die. I am grateful to Super for helping me to understand the importance of these "natural gifts" within the village of Dagbamete.


Interviewed by Courtney Flett, Summer 2010
Back to interview listing