Difference between revisions of "Vivian Dunyo" 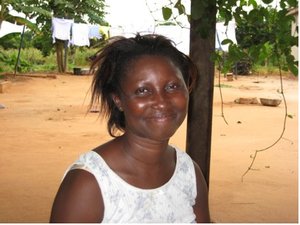 Vivian Dunyo has lived in Dagbamete her entire life, she is married to Kwasi’s son. When asked if she plays and music, she said she sings, plays borborbor, and kpanlogo drums. Her grandmother taught her everything she knows about traditional music. She did not learn it in school. When asked if she teaches her children about traditional music she said that she lets them listen to a borborbor cassette but she does not sing to them, and the children's grandparents will teach them about traditional music. When I asked her about women’s roles in drumming in the past she said that when she was growing up there were never female drummers but that its changing now, and they also allow women to play ‘hatcha’ in the shrine.

She knows the songs bobobo, kpanlogo, and sings other songs as well which her grandmother taught her in the home. She said they used to play Adem which is a game played with traditional music. The traditional songs have remained the same. She lets her kids listen to a bobobo cassette tape that she has so that they learn the song. She doesn’t actually sing to her children. She has many children the oldest being 18 (who doesn’t sing or dance traditionally) and the youngest being 5 months. Her parents and in-laws have been teaching her children the traditional music. She said that women never drum just sing and dance but that this is starting to change because sometimes women play ahache in the shrine, and that younger generations of girls are starting to drum but she never learned when she was younger.

For this interview, the interviewee did not speak English very well so I often had to help her finish her sentences.

Q: How long have you lived in Dagbamete?
Vivian: Her whole life

Q: Do you do a lot of singing? Who taught you to sing?
Vivian: Yes, she sings songs such as borborbor and kpanlogo. Grandparents taught her to sing.

Q: Did you learn any music at school?
Vivian: They played a game called Adem, a traditional game played at school

Q: Do women have a large role in music in the village? Are they beginning to have more freedom?
Vivian: It is rare that women drum, mostly sing and dance. Women are beginning to be more participant.