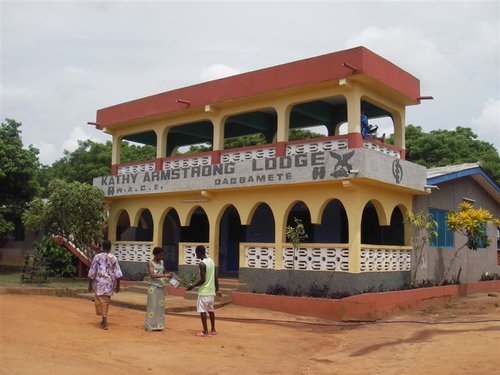 Students in the University of Alberta West African Music, Dance, Society, and Culture summer program reside for nearly two weeks in the village of Dagbamete, near Akatsi, in Ghana's Volta Region, where they conduct field research. This research centers on eliciting stories of musical experience and especially the nature and causes of musical change in the village. Interviewing a wide range of village residents, young and old, students discover some of the ways music and related expressive culture (dance, ritual, costume) has changed over the past century or so. Change has been particularly rapid over the last 20 years, especially with the introduction of electricity, impact of mass media (TV and radio, with resulting impact of urban and Western musical styles) and new technology (cell phones abound, and there's even wireless Internet!), increased urban migration, development of musical tourism (including study groups such as ours), population growth, broader access to education, and globalization. Note: Student researchers typically do not record interviews, but rather take notes which are presented here as summaries or approximations of actual interview exchanges.