Difference between revisions of "Michael Frishkopf"

Note: I will not be scheduling regular office hour appointments in Spring and Summer terms; please write me if you need to make an appointment.

Click here to schedule an appointment.
Please only schedule one appointment at a time!
(Please note that I won't confirm these appointments on Google calendar, as there are too many of them - so long as you've signed up you're on my schedule!) 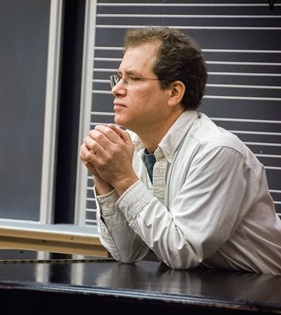 His research and teaching combine a number of different fields, including ethnomusicology, anthropology, Middle East studies, religious/Islamic studies, psychoacoustics, computer science, media studies, literary studies, music theory. He is a lifetime member of the Society for Ethnomusicology, the International Council for Traditional Music, and the Middle East Studies Association of North America.

In performance, Michael specializes in the nay (Middle Eastern reed flute), and also performs the song-drum-dance traditions of Ghana. He is the founder (in 2004) of the University of Alberta Middle Eastern and North African Music Ensemble, as well as the University of Alberta West African Music Ensemble (in 1999). Both ensembles perform frequently in public in the Edmonton area, especially to support progressive causes. He also performs “Third Stream” and world music inflected jazz on the piano, following studies with Ran Blake and others in the Third Stream program at the New England Conservatory of Music in Boston.

Some current projects include:

Some recent invited talks and lectures

In recent years, I’ve moved sharply towards an engaged ethnomusicology, centered on what I call music and global human development, collaborating on production of “traditional” and “popular” musics (including media and music education) as tools for global development of communities marginalized and disempowered by colonialism and its aftermath, on either side of the North-South divide between “developed” and “developing” nations. Such work follows a participatory action research paradigm, ideally engaging local communities as equals, and subjecting all work to critical reflective scrutiny.

There are two main directions to this work:

For a recent writeup, see this story.

Songs for sustainable peace and development

A set of participatory action research projects centered on the use of popular music to disseminate development messages, especially for key development issues in public health, education, religious/ethnic tolerance, and peace. I have been working primarily in collaboration with Liberian refugee musicians in Ghana, and recent returnees to Liberia, helping them articulate and disseminate musical messages of peace and development, producing media with a triple purpose: catalyzing positive social change locally, raising awareness globally, and generating a revenue stream to support their musical communities.

Several songs and a music video have been completed or are in progress; see http://bit.ly/songsspd.

Projects for cultural continuity, supporting Ewe music of Ghana, El Mastaba Centre for Egyptian Folk Music, the Egyptian Centre for Culture and Art, and AMAR (Foundation for Arab Music Archiving and Research), Beirut, including consulting as a member of the Board. Media products are designed to catalyze local social progress, raise global awareness, and generate a revenue stream for local musicians.

(Click for notes on several of the following compositions) ...

Nay for The Color of Your Voice

"Listen to everything all the time and remind yourself when you are not listening." -- Pauline Oliveros

"After silence, that which comes nearest to expressing the inexpressible is music" -- Aldous Huxley

“My soul is a hidden orchestra; I know not what instruments, what fiddlestrings and harps, drums and tamboura I sound and clash inside myself. All I hear is the symphony.” -- Fernando Pessoa, The Book of Disquiet

Music is more than sound, for silence is also music -- Michael Frishkopf

"I have nothing to say and I'm saying it" -- John Cage

"Music, in performance, is a type of sculpture. The air in the performance is sculpted into something.” -- Frank Zappa

"Music is among the most powerful of all social technologies" -- M. Frishkopf

"The craft of singing...is the first to disappear from a given civilization when it disintegrates and retrogresses." - Ibn Khaldun, 14th century