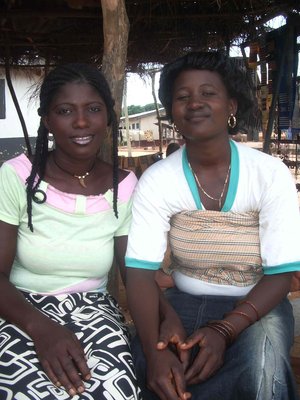 Etornam Attioe and Ama Dogbellia have both completed Junior High School, and work part-time at the Drinking Spot. They don’t play drums but they sing and dance at the shrine, and are not a part of any dance group in the village. They have learnt Ewe songs and other cultural songs in school. Their favorite music is hip-hop, Sean Kingston, Celine Dion, and West Life. They like to buy cassettes or listen to hip-hop on the radio, and watch or mimic the dance moves from the television. They like traditional music but prefer music like hip-hop because it is new, whereas traditional music is music that they hear all the time. Each girl has a radio and they watch Nigerian, Ghanaian and American films.

Etornam’s parents do not play anything, but her aunt plays the rattle, whereas Ama’s father plays the drums, and he showed her how to play the drums. Their mothers also participate in the dancing and drumming at the shrine. Etornam practices traditional religion but she goes to a Catholic church sometimes to sing in the choir. Ama likes going to the Catholic Church as well and she has decided to go on her own.

Although neither of them play the drums, they are trying to learn how to play. They hear the rhythms from the shrine and then they try it on the table tops in the bar. The girls talked about the different tempos of the drum pieces and how the dancers control the movement or speed. If the singers sing and the dancers dance slow, then the drummers will drum slowly. (Singers have the most control of the tempo).

They said that different songs are played at the shrine each Sunday and the elderly people decide which song to sing. Their fathers teach the younger ones in the shrine and they have to learn ‘on the spot.’ The girls plan on going to university in the future, and they will move where ever they get accepted.