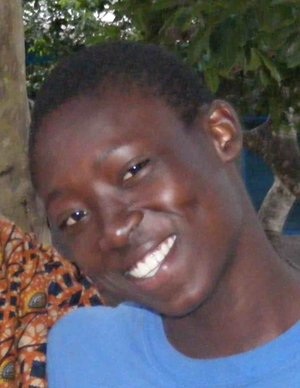 Daniel was born in Ashiama, about 2 hours away from the village. He moved to Dagbamete when he was about 11 years old. His name is from a family of le Otu. His mother’s name is Maggie and she also lives in the village, but his father is a driver and lives in Ashiama. They live in the village and go to school.


No one in Daniel’s family played any musical instruments and he was not taught music at home when he was young. Daniel learnt music in school, and he says that every Friday he had a music class from 9:00-10:30 p.m. All the children gathered to learn music together, and they had a female teacher for music.


Daniel speaks Ewe and English, and says that he was taught Ewe songs such as "Borborbor" in school. The instruments that they played in their music class were gankogui, kedenu, and hartey. His favourite instruments is "kedenu." Daniel said that some girls sometimes played drums in their class but mostly the girls sang. He has only seen two women play the drums in the village and one at the shrine. This surprises him, but he likes it as well. However when he was asked if the girls in his class like to play the drums he refused and said that they just sing and dance. He also added that boys are better at drums than girls because girls do not know how to play it, and explained that it is because they were not taught at home.

Daniel plays with the "Borborbor" drumming group in the village. The group is made up of about 25 people, amongst whom the youngest is 11 years old and the eldest is 21 years. They have performed five times for the village since he has joined, and he has performed at a birthday celebration for instance. However, no girls in the group are allowed to drum and they can only sing and dance. He also listed other drumming groups in the village. such as Akpoka, Atigo and Braketey.


When asked if he has viewed new songs, dances or costumes at the shrine, Daniel answered that everyone has to wear a cloth on the waist and it is a taboo if you do not. He said that it was something recent and that the chief told the villagers that they had to wear the cloth. When asked about music at funerals, Daniel says he does not like to go because he does not want to see the dead bodies.

Daniel’s favorite music is gospel music and he mostly hears it on the radio and on the TV. He has a TV in his house, and he watches a gospel program every Saturday night. His favorite song is called “Oh arawde” and its sung by a male singer. Daniel’s dream job is to be pilot.

Interviewed by Hannah Searson in July 2008

Daniel Afotey speaks Ga and Ewe. He likes listening to gospel songs. He was exposed to these by his father who is a member of the “Living Blood” church in Ashiama. This is his favorite type of music. His favorite gospel artist is Esther Smith, a Ghanaian. He does not like hip-hop and hip-life as much as he likes gospel. Sometimes people will listen to hip-hop and hip-life together in a group and play drums while singing the music.

Daniel plays in the Borborbor drumming group and was taught by Sakora Dzemesi in 3 days. People in this group typically range from 15 to 25 years of age. The group has been in Dagbamete his entire life. He says that girls sing and dance while the guys drum (the guys will only sometimes dance). He explained that the girls do not know how to play drums well.

Daniel attends the shrine. However, he does not sacrifice animals because this is only allowed after 18 years of age. He will often participate in traditional dancing at the shrine though.

Achego, Akpoka and Unity are the 3 current drumming groups in Dagbamete. These originated 3 years ago. Before this only "Borborbor" existed. Daniel knows Gahu. However, he is not familiar with the master drum part. He likes "Kpanlogo" and explained that it is mostly played at Easter and Christmas. Daniel’s sisters, aged 18 and 19 years , listen to "Kpanlogo" on their headphones.

Daniel says that drumming groups make recordings of the music at funerals to sell them. People listen to them for pleasure. They are sold to recruit new group members and to allow people to be familiar with the music of the group before they join. The people of Dagbamete like it when the “white people” who come to study with Kwasi perform for them. They like the way that Westerners dance and sing. Most of the Westerners began coming to Dagbamete 2 years ago. Speakers are used at funerals for larger crowds to hear. Many people watch Nigerian and Ghanaian films on TV as well as the news. This is a major source for hip-hop music in the village.

In the school in Dagbamete he learns Ewe songs on Friday. Other villages such as Ashiama learn English songs. Women sometimes drum in funerals and will do most of the singing. It is primarily the men’s job to do the drumming. Daniel explained this as “sharing the work.” At Christmas time the entire village will contribute towards a community meal under the two large trees where hip-hop music is often played.