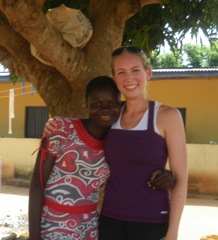 I first met Christy Agbodeka when I decided to explore the village one afternoon after the first of our daily drum lessons. Christy lives with her mother, father, stepmother and siblings just a few steps from the Lodge in which we were staying, so I hadn't wandered very far before we crossed paths. Christy was sitting beside a large tree just outside her house, rinsing tomatoes in bowl of water. Her mother sat close by sorting through some of the dried fish that they had brought back from the market, getting it ready to sell, or perhaps trade, to people in neighboring villages. Christy's mother, Comfort, spoke no English and I no Ewe, so I was unable to determine exactly what it was that she was doing. However, Christy was more than happy to have me sit down and join her as she worked on cooking the family's meal for supper. We sat across from each other and I watched, as Christy explained what she was doing. I helped to grind up some of the tomatoes, but for the most part, Christy enjoyed being the chef and I enjoyed my role as a culinary student observer. I stayed for almost an hour as the meal was prepared, and in this time I feel as though I only got a small glimpse into the life of this young girl. I knew that I wanted to learn more.


Christy was more than willing to sit down with me for an interview, and in fact, I would even describe her as excited about it. I was interested to see what thoughts a sixteen year old girl would have on the music in Dagbamete. I started by asking her how music affected her. Her response showed a dichotomous relationship with music. Though she likes music, there are times - when she's not feeling well or when she is hungry for example - that she hears it and hates it. Christy also identified two types of musical cultures, "the local one is the one you perform in your community, but the official one is the one the musicians have been doing." Confused by this, I questioned what she meant by the official one that musicians have been doing, and realized that what Christy was referring to is music that was brought in from Western cultures. Obviously, this music is not the same as the traditional music found within the village. Christy identifies the main difference being that for the traditional music, "you are going to use a drummer to play." In addition, Christy told me that music in the village is used in festivals, and that different music is used in shrines. I had previously interviewed Christy's father Super Agbodeka, who also mentioned the idea of music being used in festivals. It is evident that there are certain areas of Ewe culture where music is essential.


In contrast to in the village, in schools traditional music plays a lesser role. Christy is currently in her third year of Junior Secondary School and she says that she has "a good performance in school," but money for schooling is hard to come by. The first type of music that Christy mentioned from her school was fanfare. Though drums are also played, the music learned comes from "the musicians." By this, Christy was again referring to music from Western culture. I asked Christy more specifically what kind of music she learns in school, and her response was "Christian…I'm in a Catholic school…So, we don't have the traditional." It was interesting to me that Christy made a point of saying that the people at her school don't know that she's traditional. They don't know that she is "here from this village." When I asked her if she thought the village was traditional, her response was, "yeah, but me, I'm also among them." Christy identified different styles of traditional music and dance that she takes part in, mentioning: Kpalogo, Gahu, and several others for which I am not sure of their Ewe spellings. After only just beginning to learn how to do some of these dance, I can certainly understand why she would want to take part in them!


Interview by Courtney Flett, Summer 2010
Back to interview listing