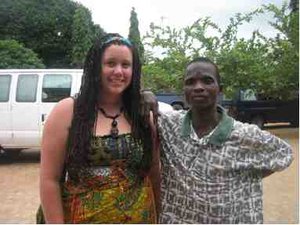 Yao Dunyo was born in Dagbamete, and only plays culture, not music. He plays axatse every week at the shrine. He says that the music and drum patterns go with the part of the cycle that is being performed at the shrine.

The songs performed at the shrine are about healing. They are asking the gods to kill the animals in the text of the songs that are used for sacrifice. There is no change in the shrine music or its instruments.

The axatse and gankogui rhythm that we play in class, he says, originated in the shrine and was brought outside the shrine firstly for sacred purposes, but eventually for secular purposes as well. Dunyo continues to say that in the shrine is culture. Culture must be maintained. “This village is built by one man and one woman. Their child is an automatic member of the shrine, and does not need to be initiated. People being initiated are from other villages.” He then goes into the topic of sacrifice, and claims that the purpose is for people who need help, so they sacrifice to the gods so that they will continue to protect you.

Dunyo says that in Dagbamete, outside the shrine there are two drumming groups for entertainment. They use the same music very often, although, new music is very common (but only outside of the shrine), and thus they play both new and old music. He stresses once again that this is only for entertainment.

Two examples that he gave me of music inside shrines are “afa” and “yewe.” However, these are from different shrines, and have different gods. This is the only Apetorku shrine in Ghana. 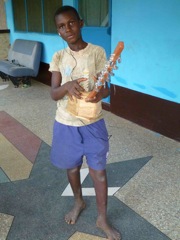 
I have noticed that a young boy, Yao Dunyo, continues to follow me around asking to play the “jitar”. I am certain he is talking about the Seprewa I am practicing about the village. So, he sits by me after patiently waiting to try out the instrument and we have a conversation about why he is interested in the Seprewa and then, due to a language barrier, I demonstrate what I know on the instrument and he follows through learning at a rapid pace.


Kathleen: “You call this instrument (the Seprewa) a “jitar”. Why do you call it a jitar (meaning guitar)?”


Kathleen: “Why do you call it a jitar?”


Yao: (he points to the strings)


Kathleen: “Have you ever seen this instrument before?”


Kathleen: “Can you call it a Seprewa?”


Kathleen: “Yes. This is a Seprewa and let me show you how to play it.”


Yao: (he pays very close attention while I demonstrate some basic thumb exercises then I encourage him, without words, to demonstrate back to me on the instrument what he has learned…he does)


Kathleen: “You are doing very well. Please take care of the instrument and ask to borrow it when you would like to practice.”