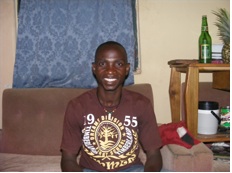 Wisdom Dunyo was born in Dagbamete but spent a good part of his life in Kumasi where some of his family lives. He finished his studies at a technical institute in 2004 where he learned how to work with electrical wiring. He mainly speaks Ewe and Twi.

Wisdom takes part in the drumming of the shrine. According to Wisdom, music of the shrine does not change in Dagbamete because it is associated with spiritual powers. He also explained that everybody is allowed to play the music of the shrine. Drumming groups in the village such as Unity and Akpoka can change rhythms at any time, and a composer/poet will contribute new lyrics to these rhythms. Therefore, the change in drumming rhythms comes from the group leaders and drummers, not from outside the community. He just recently learned how to play Akpoka, Atrikpui and Kinka, from Kwasi Dunyo. Wisdom’s favorite music is gospel music even though he is not a Christian. This was a result of his exposure to this genre during his time in Kumasi. He explained that the Ashanti are the primary performers of gospel music. However, he does not like Ewe gospel music. Reggae is another one of his favorite genres.