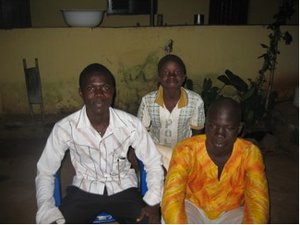 Samuel and Robert were both very well educated and intelligent young men. They shared some very interesting opinions on the topic of musical change in their village and a great deal of insight into the impact of Westernization and Modernization in Dagbamete.

When asked where they had learned the music they know, Samuel and Robert both said that they had learned a great deal at school. Samuel said, however, that you can pick up many songs just by listening to someone else play, but only “if you are smart.” Growing up, Samuel said that his parents also taught him many songs. From what Samuel and Robert said about learning music, it seems that the learning is often done as a sort of group effort. Musicians pick up songs from each other at funerals, birthdays and other celebration. Songs are represented in every aspect of life in the village, and every ritual offers a new opportunity for learning. As Samuel explained, “No one is perfect, so everyone learns from each other.”

Samuel and Robert both talked about the concept of community in the village, and the fact that they do not exist in an individualistic society. Community is very important to them. When asked about the influence of technology, Samuel said that even with newer technology, music brings people together. He explained that because not everyone can afford things like a TV, one person might have a TV, and everyone else would gather at their home to watch as a group. Samuel also said that the TV, radio and other new technologies have introduced a lot more music to the village. When I asked about the changes in dance in the village, the boys said that change occurs mainly because of “individual polishing” of dances. They also said that some dances and songs that had been lost many years ago have been reintroduced. In regards to the change that occurred in this music, Samuel said that it is difficult to tell whether or not any change has occurred, because so much time has passed. Because there is no documentation, he explained, it is impossible to tell what is different. The only songs that are written, Samuel said, are those that are taught in schools. Talking again about words in songs, Samuel told me that although the words of songs sometimes change, the meaning of the song does not. When I asked about the influence of Christianity, Samuel and Robert shared some very interesting ideas. Samuel said that Christianity had instilled in people the “belief that some songs were barbaric.” As a result, people changed the words to songs. I asked Samuel how he felt about this change, and he said “not good, it is not correct.” Samuel and Robert explained that they are very open to the ideas of Christianity, but do not like the idea of it replacing their traditions. In Dagbamete, Robert said, “tradition is very respected.” Samuel said “Tradition is best: you must remember your roots.”

In general, talking about tradition, music and change in the village, I had the impression from Samuel and Robert that although they are accepting of new ideas and technology, it will always be secondary to the importance of tradition in Dagbamete. For Samuel and Robert, technology and new music are not associated with nearly such a strong identity and defining of self as traditional music.

I had the opportunity of sitting down and speaking with two young men from Dagbamete, Ghana on the subject of the music they’ve experienced and the changes they’ve witnessed in and around their village. These two thoughtful and intelligent men offered some interesting insight on some of their musical experiences.

Samuel and Robert were both born and raised in Dagbamete. They grew up attending the local school and reported that it was in school that they learned many of the songs they knew. Though songs are taught to children by rote, they are also written down so as to best preserve a pedagogical resource. Many songs are also learned by listening to and interacting with other children informally singing outside the classroom. “Singing” according to Robert “is something that is done all the time, people use it to entertain themselves and help pass the time. There were always lots of songs to learn and share”. Samuel reported that people often get together to make music, share songs and entertain one another. Many of the songs they knew were learned from this type of community interaction.

Samuel and Robert also reported that songs could be learned as you visit neighbouring villages. There, you would hear people singing a different collection of songs and could come home having learned a new song or two but “only if you are smart”, reported Samuel. It would take a quick ear to be able to learn a song on just one or two hearings along. These new songs however could be incorporated into the community of Dagbamete. Thus the transmission of songs from village to village would occur. Samuel has noticed that there are more children that know songs in other Ghanaian languages than he knew as a child. Most of the songs that Samuel and Robert learned growing up are Ewe songs, taught to them in the language of their family and village found within the Volta Region. Ewe people are typically found in this region of Ghana, but other languages, including songs in these other languages are also heard, learned and shared. Samuel reports that as a boy the songs he would learn would all be in Ewe but “it’s changing now and many songs are taught and sung in English, Twi, Ga”. As English has become such an influential language and is one of the languages heard through all parts of Ghana, often English words will be incorporated into traditional songs. Children learn these bi-lingual songs like they would learn any other: by hearing them and singing them themselves. He explained that children today will typically know more songs in other languages than he did at that age. He suggested that transportation from village to village is becoming more accessible thus people can visit more often with one another.

Samuel and Robert reported that it is not only songs in different languages that have changed since growing up; the way people participate in music making activities has also changed over time. With the advances and increases in technological exposure in Dagbamete its community also incorporates more technology into the way they make and enjoy music. Robert explained that it is a source of excitement and opportunity when someone has a television. People will gather at the house to watch TV as a group. New songs and music are exposed to people through this media source thus introducing more modern music to the community as well as the individual. TV, radio and various portable music devices have and continue to introduce modern music to remote areas of Ghana.

Samuel noted that some songs are introduced back into popular culture of the village. Like many things, songs, dances and various things go in and out of fashion. Some songs are popular for a time while others fade away. Samuel said that as a young boy he remembered his grandparents mentioning certain songs that he had never heard. Now that he has grown up he reports hearing these songs sung once again by young people in the community. Robert added that sometime the words or tune of a song may change a little depending on where you come from but the meaning of the song does not.

Samuel and Robert noted that words in Christian songs were often changed. Samuel reported that due to Christian influences many people believed that “song songs were barbaric”. As a result, the words to certain songs were changed. Both Robert and Samuel thought this changing of traditional words to suit a Christian ideal were “wrong” and “destroying our traditions”. These 2 young men stated that they were not opposed to Christian ideas but are very much against changing their traditional songs and customs in order to suit Christianity. Robert closed by saying “Tradition must be respect, it is the best way and you must not forget your roots”.

Robert and Samuel were well educated, ambitious and thoughtful young men. It was reassuring to see that despite being open to modern technology and advances they continue to hold their traditional foundations in high regard. Modern music and technological convenience may be entertaining and enjoyable but, for them, the essence of their music lies in the heart of traditionalism.