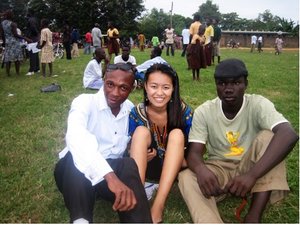 When I asked Samuel about the value that music has in his life, he responded that music makes him happy and makes him enjoy life more. He started learning traditional drumming and dancing when he was very young, about 15 years ago. He has lived in Dagbamete for all of his life, and has seen subtle changes in the village. Samuel noticed the increase of profit in Dagbamete, because there is more tourism activity in Dagbamete. Because of this, he felt that money has changed and improved the quality of musical performance, such as the venue, costumes, equipments, instruments, etc.

Aglago has been teaching at the Dagbamete Junior High School for only one year, and his subject of specialty is Basic Designs and Technology. The school does not have a computer lab, so the students learn about computers and the programs solely based on books. He is originally from Ho, which is the capital of Volta Region. He said that the dancers in Ho use more of their bums to dance Bobobo, but the people around the regions of Dagbamete use more waists in the Bobobo dances. The other traditional pieces that are popular in Dagbamete and its surrounding regions are agbadza, kinka, kpoka, and unity.

They have informed me that there are not many drastic musical changes in the village. However, music can bring changes to the people’s lives: • Music unites the villages, ex. during festivals, funerals, Easter, at the shrine, etc. • Music helps people financially, ex. people contribute money to the family of a death member during a funeral gathering, the West African Cultural Exchange (WACE) program in the Dagbamete village • Music helps with development in the village, ex. when a governmental worker or a minister comes to visit the village during certain festival gathering, one is able to see what kind of improvement the village needs in order to achieve better living for the residents • Music teaches children the traditional language (such as Ewe) and about moral values through traditional songs, ex. way of speech, traditional dressing, and life in general

These two gentlemen both learnt traditional drum and dance from their teachers and parents. In the Ewe culture, it is very common for everyone to grow up with traditional music. In this village, everyone learns music from the shrine from birth.