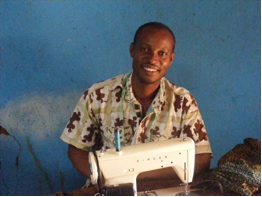 Sakora learned music by accompanying his parents to community drumming group at 4 or 5 years of age. He says that there is no pressure for young kids to learn drumming, and everybody knows how to play axatze and gankogui. Sakora claims that he doesn’t know much drumming, but knows how to play kinka, gahu and agbadza. Sakora is the teacher of the borborbor group, and he also plays in the shrine of which he has been a drummer since a child. Kpanlogo is very popular in the village and came from the Ga people.

According to Sakora, women play drum at the shrine. They play the supporting part, not the master drum, and he does not see a problem with this. He says that there were women drummers present there when he first joined the shrine.

Sakora told me that many people watch TV and listen to the radio today. People play the cassettes from the community drumming groups for their listening pleasure. There are 3 radio stations in Volta Region, 2 in Ho, 1 in Keta, and people listen to these stations often. They are broadcast in Ewe, Twi, and English.

He likes Hip-hop, high-life and hip-life as well as reggae, which he started liking 5 years ago.Kids often play a different type of drumming from the elders. For example, many younger people play borborbor, which is for self-entertainment. Recently he made a cassette of the kids playing borborbor.

He told me that speakers came to the village as early as 1998, when electricity came. Now speakers are used to entertain the younger ones during the wake-keeping at funerals. These younger kids often listen to “spinners” with highlife and hip-hop at the funerals. The composers of the drumming groups often create new songs and new variations. He explains that everybody can compose a song or a new variation. In technical schools music is studied, but not in the school in Dagbamete.

The Akpoka drumming group started in 2003. The Unity group is another current drumming group in Dagbamete. He likes Ewe music and traditional music the most and especially likes learning variations to the songs.