Oliver and I discussed some topics that would lead to a better understanding of the music played in the village. Oliver talked about the music he listened to as child; it was mostly drums such as the brekete. New drums such as the ajogo (sp), fomefome (sp), and gahon (reformed)(sp), palogo (sp), and pacha (sp) have been introduced in the villages as well. Some of the drums never change so they remain like a universal language. There are more than seven drums in the village’s ensemble. Agbadza music is played in the Volta region. Oliver explains that their traditional music has been passed down through generations and now it is time for their generation to teach the new generations their traditional music. He said that the traditional drums have never changed; he and his mother both perform the same dances as well. The songs have not changed nor have the dances. He says that new music comes into the village from other villages; this brings opportunity for experimentation, improvement and changes in style. And when the drums change, the dances change with them. Interested children can play music and dance from young ages; he started dance at the age of 5. About 75% of the people are familiar with the traditional drums and dancing but to learn from the best you must go to the master drummer to learn. Oliver says that his religion doesn’t influence changes in the drums; the religious music is separate. In my opinion, the music in the shrine was similar to the traditional music we learned about in the village. Oliver discusses how there are songs that have been passed down through generations as well. Each song is appropriate in certain events but not so appropriate after the event. Some of the songs are call and response songs just like the drums. The call and response system is the drummers language that only drummers can understand; the drummers from the same regions can understand each other. The meaning of the drums changes within the regions; Ewe drummers cannot understand Asanti drummers. Oliver believes that the youth have not drifted away from their traditional music as a result of technological changes. The new technology has opened new doors and introduced new music but this music does not replace the traditional music but rather opens up one’s mind to a deeper understanding of different types of music. Oliver’s message to people such as myself and the children of the future is to “learn about anyone’s music is very grateful and good and sometimes it helps you in cooperating with others”. I truly enjoyed this interview; I found it very interesting and educational. I learned a great deal about Ewe music and specially music in the villages and the changes/challenges it has faced. 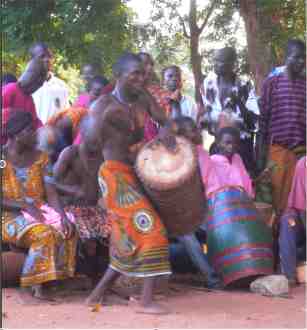 
I had the chance to sit down and speak with Oliver Torgboh from Dzogadze, a village not too far from Dagbamete. We had met a few times when he would stopped by to assist Kwasi during our drumming lessons and he amazed us with his drumming and dancing at the performance we had attended in Dzogadze.
Oliver, twenty-four years old, was born in Dzogadze. He is currently studying Information Technology, but this is only to earn a life in Ghana. His real passion is music. Born to a musical family, his father, mother, and brother belong to some of the same troupes as Oliver. He feels that he was “born with the music” and started playing when he was 5 or 6 years old. “When we are kids, you always gather beside the senior men [drummers] and watch them do whatever they are doing…you watch and then do…We are always allowed to go and touch the drums as we like.” Oliver is a member of many groups and performing troupes. In some of these groups, he is even the Master Drummer or occupies other leadership roles, including starting up groups in his former senior secondary school. His passion is evident; “I set up music [groups] in my schools because...I felt I had to have something to do with music in any situation I find myself, and you can’t do music alone, especially our traditional music.” Sometimes, the groups he’s created in his schools continue after he has left. Other times, with no leader to organize it, the groups cease to exist. “No Oliver, no music at my school.”
Fortunately, according to Oliver, traditional music in Dzogadze is not at risk. “In my village, no Oliver, there will be music.” I asked why he thought the practice of traditional music is so strong in his village. “The main reason” Oliver answered proudly, “is that in my village, we value our traditional music. We value it a lot.” He believes this is why there is not much concern for the influence foreign musics on their music. “We don’t value it” he states simply. “A man without knowledge of his background, like the music or tradition...is like a tree without roots.” He continues, “the foreign music is there too, but still, you can maintain your own thing.” Although the foreign music is present, it is not influencing the traditional music.
Perhaps the village’s strong belief in tradition is the reason why he has not noticed a change in his village’s music. The music he hears now is the same he heard when he was young. “We do [traditional music] the way it was formerly [done]. I don’t think traditional music can change.” According to Oliver, foreign influences are acting on the culture elsewhere in Ghana . “Hip-hop, hip-life, and High-life [doesn’t] use our local instruments.” He feels that having people come from outside Ghana to his village and neighboring villages to learn the traditional music only reinforces its value rather than putting it at risk. “Now we are having people from foreign countries that are choosing out traditional musics. We realize we have something valuable, we are keeping it up....having foreigners in our town, concentrating on our music is helping us to bring up our traditional music.”
According to Oliver, another foreign influence that is having a positive affect on traditional music, is technology. “Without technology, I don’t think our music can reach far away. But, technology like computers, cameras, mobile phones, televisions- they help us demonstrate our musics far away. As I’m in Dagbamete now, I cannot tell where why music reaches, but definitely, I know that it is reaching far away.” In his eyes, technology is more of an asset. “If you do the music now, somebody can put that music on Facebook, websites... so, technology helps!”
Another way technology is helping traditional music is in its preservation. Ledzi, another musician and dancer from Dzogadze, and Oliver undertook to record many of songs from the elderly ladies of the village. “Ledzi and I walked from house to house to collect the songs from the old ladies.” In this manner, the songs will be alive forever. Many of the ladies had previously never even seen any thing like the recorder. “We start up the recorder and they give us a very melodious, sweet voice.” Transferring these recordings onto computers, they burned the songs onto CDs for others to play and learn. “This is why I said technology is helping.”
Oliver enjoys sharing his passion for his traditional music with others, whether it be through technology or other methods. Since 2003, he has been helping Kwasi Dunyo and the West African Cultural Exchange. “I am very happy to teach somebody how to dance, how to sing, how to play.” Music is always in his home. “My door is always open [to] anybody that maybe interested to learn the music. I would be very happy to teach somebody something that I have. If I’m still teaching [traditional music], then I still know it.”
In speaking with Oliver about tradition, music, change, and technology in the village, I gained the impression that there is a very optimistic outlook on the durability of traditional music in the area. The introduction of new music and new technologies serves to strengthen, rather than weaken the practice of traditional music: the strong roots needed for a family tree of musicians.