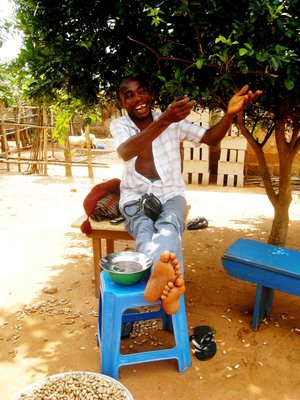 Nicholas Awuku has completed 4 years at Roteko, a technical school in Accra and became a supervisor for shipping and export-clearing agents. He is currently a member of the shrine and has lived in Dagbamete for 3 years. His father was a driver and a farmer, and his mother was a trader and owned a stall in Ho. His family was originally from a traditional village and so was away from Christian influence. As a child, he learnt to drum by watching others in the traditional community, and has had no formal drumming education.

According to Nicholas Awuku, women can drum like men, and they are allowed to drum in the shrine. The city of Ho always had electricity, therefore there is a greater influence of contemporary music in Ho. In particular, gospel was very popular, and it talksd about love and happiness. After work, he would listen to music on the radio and cassette player and his preferences for music are gospel, traditional, and funeral society drumming. There was no shrine in Ho, and Christianity was more prevalent than traditionalism. Therefore their family went to Accra or Tema for worship.

Nicholas was living in Accra when he was involved in a workplace accident. Metal sheeting fell on his body, almost killing him. There was no doctor for his injury in Ghana, and only in London. The doctor would not come unless Nicholas paid for his plane fare, so he had to sell his car, some small buildings he owned and even his apartment to pay for the ticket and hospital fees. He came out a year later with a noticeable limp and zero capital left to his name. He met his wife in Akatsi, and wanting “someone to look after [him],” he proposed. They have been married one year, but being unable to pay the dowry, Nicholas is still saving money from his phone cards to pay for both the bride price and the future wedding. He has a broad forehead with a bump left from his accident. His large smile is broken by the gaps between his teeth, and the voice that emerges is soft and kind. Although he cares deeply for his wife, this does not stop him from being with other women which “disturbs” her to no end. Music does not play a huge part in his life, but he did express sadness at no longer being able to dance and was adamant, “When you come back, I will teach you to drum, I know how.” From his wife’s shop, outside which he would sit patiently waiting for business- the radio would blare everything from Western hip-hop to the night-time gospel and the appointed preaching hour.