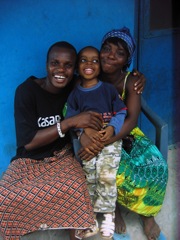 Nicholas: A good way to start would be: What’s your name?


Kwadzo: My name is Kwadzo Dunyo Moses and I’m a native of Dagbamete and Kwasi’s son.


N: Were you born in Dagbamete?


K: No I was born in Ashaiman, but Dagbamete is my hometown so all the time when I was a baby they used to bring me during festivities and other stuff to come around to experience the spirit of my hometown.


N: In growing up here, were you involved in the shrine or the music?


K: I didn’t get involved with it, but I was born with it. My great-grandfathers - they were in it. It’s our culture, our tradition that we started with. I was born in it so that I can make the tradition and the culture continue so that we do not forget about where we are coming from because if you don’t know where you are coming from, you don’t know where you will go to. They started it and we were born in it. Music, to say, is a kind of thing that’s used to bring all communities together. When we get together, we get to know each other. Sometimes we’ve got parents giving birth and their children, like the way I was born in Ashaiman ... if I were not to be coming to Dagbamete, I would not get to know a lot of my family. So through music that we play people that are staying at different places, or people around, hearing the sound of the music ... music is used to draw people together. One thing about music is that it is a kind of education because the music that we sing, there are a lot of words in them that [are] used to make us to know how to live in life, how to do everything in life, how to work with people, [and how] to be free with people: that’s what music is to us.


N: You say the music has many things that teach people how to live in it ... like traditions and morals?


K: Yes, traditions, like when you see the elderly person, and you’re in a car or in the train or the Tro-tro, and an elderly person enters that same car with you and you are sitting and the elderly person has to stand, you the kid have to get up and give [the] seat to the elderly person because you the kid are not weak, whereas the old person may be a little bit weak. There are a lot of musics that are used to teach us about that in the traditional music. [As well] the traditional music is about warriors, your grandfathers, [and] the way that they used to fight, what they did before they achieved peace - the little ones get to listen to [this] through music. Some music actually, anytime that we are playing a drum [and] the music is going on a lot of kids, even little ones, babies, when they hear the sound they walk towards it. During parties you see a lot of kids, little ones coming to listen because when they start listening to [it] from the kid and they are starting to growing up with it they will learn more from it. That’s what our traditional music does: it brings us together to make one and it improve[s] socialization.


N: You’ve had the music all your life and everybody is involved with it, but has it changed while you’ve lived in Dagbamete? Have there been songs that have not been performed in a long time or are they bringing in new songs?


K: Yes, music that we have from my great-great-grandfathers it is still existing; we used to sing them and its from our elderly people. So now when the elders that are existing now if someone is good at music to teach when they get the music the elderly one will learn it write it down and go and see a different elderly person so that they will sing it together. From there, they will meet at community drumming so that we sing it out for the members also to listen to the words so that they will get used to it. So our music our songs does not go off. It stays continuous. Till life ends.


N: Does anyone ever write them down or is all just remembering them?


K: Actually, from the beginning, we don’t have actual people that would be writing them down. All the songs we have ... elders, when they get to them, they can write all the music, all the songs that we use to sing at the shrine, community drums, we [have] people that they can write it. I can write some but I don’t know as much, but I can write some of the music or the songs; I have to get help from my father or elders or great-grandfathers that are still existing.


N: A few questions ago, I asked about music in the village, and you said it brings in people from outside the village. Do people from other villages come here to hear the music and join in the shrine?


K: There are a lot of people that come to the shrine. This shrine is a fair place. Whether you are coming to the shrine or you are not a member of the shrine, the shrine is an open space for everybody. We welcome everyone to the shrine. So when it’s going on, we don’t have a problem with different people coming there because we want to get together and build as one so that together we can be. Let’s take Dagbamete community: we’ve got the shrine, and [if] we Dagbamete say we want to take it as our own, it cannot happen. We also [have] to make our message go out to others and preach [to] them about what life is. So that’s why when others listen to the music, the drum, the songs, they will come and they get to hear our message about the shrine and also feel to join the gods, and no matter what every Sunday we still get over twenty people. Specifically during festivity times like Easter time you can get over two hundred people that will come and join the gods, to be a member of Apetorku shrine.
N: With all of these new people coming to join the shrine and coming to the village You said the shrine’s message and the Dagbamete music spreads to other places and draws people in ... do the Dagbamete people also take music from other people? Do they play the songs of other villages?


K: We take music from other peoples. The songs and the music that we have for the shrine or in the specific drumming groups, the music that they have there can never be changed and we cannot go out and take other music and come and add it to ours. We use ours. In live performance like Pan Logo this kind of stuff all together we are one, so we make things together, but during spiritual things not so much. That’s what makes us stay and that’s what make us continue living and that’s what make us improv[e] whatever we are doing be it education, business, work, family, children; that’s what makes us grow strong because we believe in almighty God.


N: So you keep the shrine music separate. What other music, dancing or singing things go on in the community? You have community drumming that we went to yesterday and a couple days before that - are those things common where people get to play music outside of the shrine? 11:21


K: Yeah they are common because community drums are drums for ... it’s a kind of thing where our great-great-grandfathers laid it down for us, like the way we are living in the community. Apetorku is there already but we’ve got to form different community drum groups so that when someone is no more, when the person is dead, we can still contribute a little money during community drumming. Every month we contribute money to the community drum and then our leaders would keep our money so [that] when you are dead there are specific monies ... maybe to buy a coffin [and] for other people to come to the funeral, the expenses - that will be the money they got from the community drum to pay for this kind of stuff.


K: Yeah, and actually we play drums during every month. For any and every community drum that we have, [and] it’s not only Dagbamete [but] at different places, they pay a little bit of contribution.


N: To keep the group going?


N: The money that is raised for the funeral societies, is it only for funerals? Or does it also go to helping build up local buildings or helping people in the community or building the shrine? Does the money only go to funerals or does it go to other things?


K: The community drum is for foreigner peoples and sometimes when you are a member and you are sick, in the community drum they get help. If its money they will pay for your hospital bills and the rest they will pay all this stuff for you and later they know you are a member; when you have healed they will know to solve it in the community drum groups. The Apetorku shrine, whatever we get there, is for the shrine, and it’s for people. During festivity, like Easter time ... we have close to a thousand people in Dagbamete here. When they come in it is the same money that they use to buy maize, fish, meat, cows. It’s just seven days festivity and sometimes we’d buy up to seven or eight cows for just that festivity and we used to spend all and maybe sometimes the meat used to get finished and we’d go and buy more in addition; that is the money from the shrine. The shrines money has to take care of members there and people that they want here that is what that money is for. The community drum is for funeral issues. That is the way it is.


N: I have one more question. How many different drums do you think there are?


K: There are many! The few that you will get will make you live in your life. When you get to know over six or seven different drums, that will be good. You cannot learn all, because it would disturb your brain. If Kwasi wanted to give you half of what he knows, you could not take it! This is the truth I am telling you. Just get a few perfect. Practice makes man perfect. That is the way it is.


N: Thanks for your time, Moses.