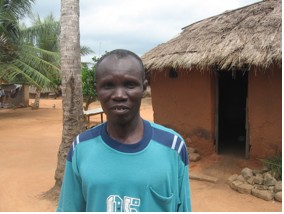 Kujo grew up in Dagbamete learning music solely by listening to others play. He explained that although his parents taught him a few songs when he was young, Kujo learned almost all of the songs he knows by watching and listening to others. Kujo drums every Sunday at the local Apetorku shrine, is a member of the Unity drumming group, and also drums in a funeral union group. The funeral union, which gathers once a month to perform, collects money at each performance. This money then goes towards the costs of a funeral if one of the union members dies. Kujo said that raising this money is extremely important because of the great expenses associated with funerals. When I asked Kujo about the different songs he knows, he talked about “Winite” (sp?) a song for funerals, as well as “Kinke” and “Agbadza,” which are played at the shrine ritual.