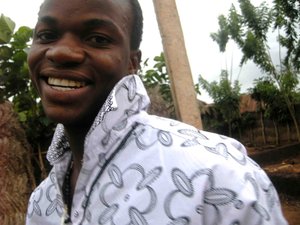 Jacob is currently enrolled in university, hoping to master enough tracks for a CD to be produced later this year. He says that even as a kid, there was music in him. He started composing in grade 3, 4 and 5 and now has 500 songs written and 100 composed to music. He wants to send masters to Canada and USA next year, and wants to feature one or two artists to increase his popularity like Rhianna, Eminem or Akon. “Their popularity will help my own,” he says, “When I perform, life changes completely, I organize and produce video clips too and music videos for schools, etc. Alias is G.H. Cali – G.H. is for Ghana and Cali stands from ‘Come and live in it.’‘It’ being the world of music...in that world nobody will be sad...I don’t let people see me sad, I’m nice to everybody, even the losers. Through those people I learn a lot. I can become anything.”

Jacob works with up to six people in the studio, who are mostly his friends. He says that it is harder for children to learn traditional forms of music in Accra because there is less exposure. Moreover, Christianity is more popular in the cities, and very few families have drums at home. He wears rosary for fashion, and remarks, “You can go to church if you want to [even if you belong to the shrine] because the Bible preaches the right thing. Your faith is what’s talking – it’s bad to worship statues and pictures.”

According to Jacob, there are many drumming groups in the village- like the Kinke groups. He says, that a person has to first develop skills in traditional music, and then start playing with the shaker and the bell. “To develop skills, you can’t be afraid of mistakes. Nervousness is off when skills are developed. Music is healing to the soul . . . people in this village really grow old.” He says that because of the brass band in Christianity, drumming is dead. “It says in the Bible, ‘thou shall not judge’ [but they did]. They brought the Bible in to confuse us.”

“My great grandfather [had powers] but he didn’t give it to anybody. It would rain and not a drop would touch him.” Kwasi says that he doesn’t have powers, but he is very protected. He is protected by the shrine. Once someone tried to poison him, but he was strong and nothing happened. “Music in Dagbamete gives unity, socialization and happiness,” according to him. “Last night [at the party, when the CD came on with hip-hop, everyone went nuts and the Borborbor drummers left] we always play Borborbor . . . we don’t experience contemporary music as much, it was just because it was something new.” I asked him what happens to hunter songs that are no longer in use? He said, some of them are still like folktales. “You know how we like to use stories to remember the past. Only some got wiped away [from disuse] because people don’t want to learn. They don’t take it serious and no longer see its value.”

Kwabla says that the greatest celebration for the shrine is on Easter, not because of Christianity but because people get a holiday on this day. There are also traditional holidays, and money collected at the shrine goes towards developing the village, not to the pastors. “After confession, the [sin] ends there . . . people are not teased about it later, and the victim has to forgive you. You create your own death by not confessing . . . have to confess at least once a year. If fowl lays down – you have nothing to confess. If fowl won’t die – you have something left to say.”

I talked to Kwabla about music in general on several occasions, like in the courtyard under the trees, sometimes in his room where he would blare his music and rap along to it or in the lodge nearing midnight. Kwabla always has so much to say about everything. Tied into his reality are streams of traditionalism, Christianity, faith, skepticism, spiritualism and humor. He loves to teach you about life and listens to your words as carefully as he speaks his own. He looks a lot like his father, big eyes and mouth, and that same knowing stare. Kwabla speaks and sings with his hands, swallowing a lot when thinking between sentences. He is waiting patiently for his visa and the opportunity to go to Canada to expand his music education and career.