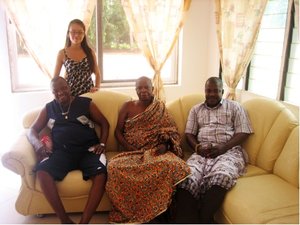 An interview with the Chief Priest of the Apetorku Shrine is one that is hard to come by. Visitors are supposed to pay him respect at an interview with a bottle of Schnapps and some contribution.

The duty of the shrine is to cure people when they get sick and when no medication can cure them. Also, the shrine is a place that helps people to achieve what their hearts desire. For example, if one wants his/her business to prosper or if one wants to marry a good husband or wife. The music that is played at the shrine is traditional African music. Music is used to bring out the spirits in the shrine, and every spirit has a specific piece of music. For example, Abegehu is a drum pattern to call for the spirit. Also, songs are sung during animal sacrifice. One cannot sing such song if one is not at the shrine evoking the gods. Thus, they are not songs for personal entertainment. There are lots of different songs sang at the shrine, and particular music belongs to each music head of the religion.
• Abababa 1. Belongs to the woman
• Abajiru 2 & 3. Belongs to the special positions in the field


When the shrine started with the ancestors of the village, no education was present to teach people how to read and write, so there were no written records of the beginning of the shrine. However, the music at the shrine has not changed much, and it has maintained its originality, because the music is inheritance from ancestors. Then I asked about the popular rattle pattern that was played during the animal sacrifices. He informed me that the rattle pattern did not originate with the shrine. The rattle pattern that was played on Sunday Aug 2 in the shrine is an Ewe beat, which is in lots of entertainment music, warrior music, religious, social and revolutionary movement. 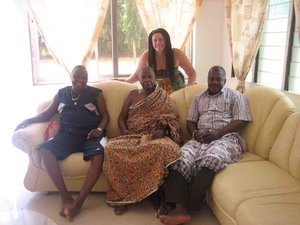 Kwasi: The Chief Priest, he is doing a big favour for you, you should know this before you begin. Many people ask to speak with him, and they have to pay, so he is doing you a favour.

Chief Priest: Every spirit, we believe, works through music more than anything else, so music brings out the spirits. The spirits work through music.

Chief Priest: The music, every music we play, is a religious music belonging to the spirit - every music here. We play agbodziwu. Agbodziwu are the drums for the spirits.

Jillian: What are the meanings behind the songs; what does the text mean?

Chief Priest: Yesterday you heard a lot of different songs. You will need to ask a question about a particular song because there are too many.

Jillian: At the very beginning of the ritual when the women are dancing the agbadza, what is the song that they are singing?

Kwasi: You see, that particular music belongs to the female head of the religion. There are three parts of this ritual. The first part belongs to the woman, and then the last two belongs to two special positions in the field. Yesterday, those people were not there, so you did not see them dancing. The other one you see is agbadada, which is the Mother of the religion’s dance piece. These are all a part of agbodziwu; any song you see is agbodziwu.

Jillian: What does the song of sacrifice mean?

Chief Priest: That particular song, or that particular part, is not just sung for singing’s sake, or when you want to. When you want to sacrifice an animal, that is when they perform that song – you cannot sing it when you are relaxing, only if you have to perform a sacrifice. It invites the spirits to come and receive the sacrifice.

Linda: So, what does the text mean?

Chief Priest: We have so many songs for that particular part.

Jillian: Can you give us an example of one of the songs used for sacrifice?

Chief Priest: We cannot take any particular song and tell you what they are saying, especially in that part of the cycle, so if you have something else to ask…

Jillian: In the last fifty years, has the music in the shrine changed?

Chief Priest: It maintains its originality.

Chief Priest: This is something that originated with the spirits, so that is how it became. So yes, any more questions?

Jillian: At the beginning, when you are pouring the alcohol onto the God, what are you saying? Are you blessing the spirits or praying to them, for example?

Jillian: And then he blesses the spirits?

Linda: So, exactly how many members are apart of the shrine?

Linda: So, you said from the time the shrine started, can you tell us more history about the shrine?

Chief Priest: The God has started with the ancestors, and they started the shrine.

Linda: And exactly how long ago was that? When did you start the shrine?

Linda: I noticed yesterday that the ahatche pattern was the same that we learned in class. Is this the same pattern that originated in the shrine, or did it adapt over the past, say, twenty years? Chief Priest: Okay, that was not originated with the religion because in the olden times there were no ahatches. The instrument that used to give the rhythm was the atchekoko. Do you know what is atchekoko? It is when the beat the side of the big drum with the drumstick.

Kwasi: I have already talked to you about the particular beat that they play – that beat is called Ewe beat. Ewe beat covers a lot of different music patterns. For example, it covers war dances, religious dances, social and recreational movement. So that is Ewe beat. Now you are playing Adzebeko, it uses the same beat. So that is it.

Jillian: Are you a musician as well?

Kwasi: Yes he is a very big musician. He has influenced many.

Jillian: Did he come from a musical family?

Kwasi: Yes, his musical inheritance is from his family. He inherited from his ancestors. So I think that is all we can answer for you today.

As translated by Kwasi Dunyo