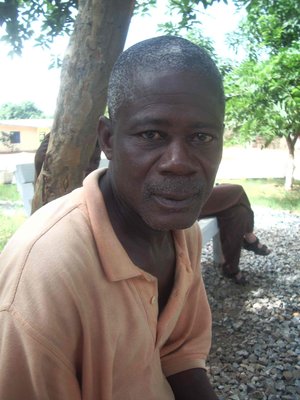 Felix Kalabo has completed Form 4 and works as a mechanic. His musical proficiencies are dance and he is a member of Unity musical group. Felix learnt to dance as a young boy in school. At the age of 39 he joined the group Unity and learnt to dance with them. The music he learnt in his childhood include Afavu, Atrikpui and Agbadza. Music will be continued to be taught at schools, and someone in his home village would play music while all the children will come to learn from him. [same as in Dagbamete]. He does not think that music will be forgotten. Music has stayed the same since childhood, and new music has come such as high-life. This has caused no problems because both young and old listen to high-life.

Interviewed by Jennifer Hermann in July 2008 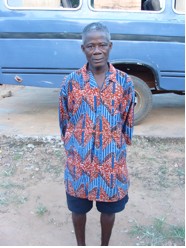 Thirteen is a member of the Unity drumming group in which he sings and dances. He is an active member of the Apetorku shrine, helping during rituals and celebrations. When I asked, “Has music in Dagbamete changed from when you were a small boy?”, his answer was, “No!” He had not seen any change in the shrine music or the Unity drumming music during his lifetime. Thirteen’s answer was an echo of the many other interviews that I had previously conducted. When I tried to ask about music on the radio and other popular music forms in the community he did not understand and replied, “Yes.” Due to his limited English and my non-existent Ewe, it was impossible for me to delve further into the musical changes of Dagbamete without the help of an interpreter.

Age: 49 years
Occupation: farmer, composer, singer, and dancer
Thirteen worked as a heavy equipment mechanic for many years before returning to the village.
Residence: Dagbamete
Much of this interview was conducted with the help of Ledzi Agudzemegah as interpreter.

Thirteen is a singer and dancer, but drums upon occasion. Thirteen learned singing and dancing in his school time days. These gifts came from God, and Thirteen found himself able to learn them. The songs have changed over time. Thirteen sings special songs in the shrine at the 10 day shrine festival and plays an active role at social events in encouraging people to get up and dance.
Q: As an expert on songs in the village, can you explain the use of the term dzegato to describe music to me?
A: if there is a complicated social issue that is sorted out, then you say dzegato.
Q: What about the term z? nyuie?
A: The literal meaning of z? nyuie is when someone is giving you advice to not be anti-social and put up good conduct, but in the context of singing or drumming, you can say z? nyuie if nothing happened within the event to distort it, such as if someone danced wrong or his conduct caused trouble. Or you can use z? nyuie to describe the whole event or for a single person’s acts.
Q: How does it change your dance event, such as a funeral when all of these obrunis show up and dance badly?
A: People feel happy that what they are doing must be a good thing because the visitors want to join in, so everyone becomes happy and it becomes a story that is attached to the event. Women seldom play drums here and when Western ladies play the drums, the local women think that they could do it too. Some people here do not dance because they don’t have rhythm, so when you are dancing it is a surprise, and maybe they can too.
Q: Do people use the terms hen? and hakpala adodoe to complement songs?
A: Hen? is used for the voice of a singer or the way a drummer acts that move the people. For example, If you sing a song well that you did not compose, the term Hakpala adodoe is used and the composer’s name is added if the composer is known, but if the song is too old the composer may be forgotten and praise is given only to the singer.
Q: If a song is not received well, what happens?
A: It shows clearly that the composer is not a good composer and the singer is not a good singer. It has a psychological effect on the listener. It changes everything and makes the event dull.
Q: Do the young people respond differently to good or bad music than do old people?
A: For the older people songs make them remember past events and this makes them feel things. The young people lack life experience. The young are more focused on instrumental music, recorded music, hiplife, reggae, more than traditional songs. Some young people are still interested in traditional singing and have the skill. This is a sign of the backbone of the future music. Also the young drummers are listening and learning the drum language, because they want to know it.
Q: Is the term seselelàme used to describe reactions to music?
A: It is not used often for music-when the song is called vivi, it is a good song. Seselelàme is a word of broad meanings that reflects feelings, often of joy. For example, if you take medicine and you can feel it working you would call that seselelàme, or if you get drunk, feel a sharp pain. It is the feeling that you have within you, it could be pain, joy, or even ticklish. So, if you have a feeling that you do not know how to describe, you use seselelàme.
Q: Many songs and proverbs use animals as teaching devices for morals. As people move to cities does that change the usefulness of animals as teaching tools?
A: Yes, the understanding is reduced, but the question they have in their mind is - what is that animal? - and they ask someone for a description. Even today many of the animals in songs are no more.