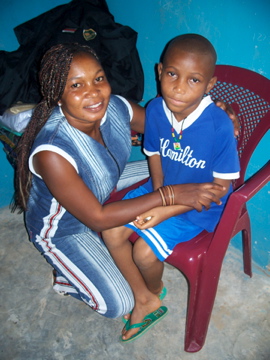 Q: What are some changes in music that you have noticed while growing up in Dagbamete?


Angelina: Today, the festivals such as Easter are much grander, and more people visit shrines and participate in festivals. The shrine started as a very small space, but gradually it has grown bigger and today a large number of people come and stay at the shrine for ten days. The number of people sometimes even exceed the number of people at the funerals these days. Also, the healing miracles that happen during the festivals are bigger now, and there are more young people present in these ceremonies.


Q: Why do you think that the popularity of the shrine and festivals keeps on growing?


Angelina: The people who come here talk about the shrine to other people and these people join them when they visit the shrine again. Also people come to know about this shrine, through the media, news and radio announcements. For example when the minister came to the Easter festival and GTV showed it on the news, it was big publicity for us.


Q: What has been the impact of tourism and the Kathy Armstrong Centre?


Angelina: There is more money, and more work in the village when foreigners are here. Some children also get sponsorship for school from tourists.


Q: How might costumes and attire have changed in the village since you have been here?


Angelina: Costumes and dress styles are the same, but fabric colors are much brighter now than before.


Q: Do you notice more women getting involved in music and drumming now?


Angelina: No. Not many women play the drums, but women always play the axtase and gankogui.

Angelina was not able to give me very specific details about the changes in music.  She spoke more about the growing popularity of the shrine festival in Dagbamete. When I asked her if music has changed because of technology she agreed that it had, but she could not give much detail. She told me that before they received electricity in the village, they used to use generators to amplify music for the festivals. She also said that children learn about their culture in school, and that is the reason why more children are getting involved in music nowadays. She had learnt music from her grandmother while she was growing up. When I mentioned to her about the growing popularity of Western music, she agreed that it was the case. She also mentioned that there is a radio station called JOYFM in Accra, that plays all kinds of Western music. Angelina offered good insight on the shrine and festivals in Dagbamete, and reasons for its growing popularity. It would have been better if she could have given more specific details about changes in music.


Interviewed by Candice Cascanette on July 28, 2008

Angelina and I had a long conversation about music and her relationship with it early the morning of August 8th during our stay in Dagbamete. Angelina is the daughter of Kwasi Dunyo, and runs a clothing store in Accra; though for vacation in the summer she comes to Dagbamete. She grew up in the village and so she has a long memory of the music in the village and the changes that have occurred over the years. While I was interested in knowing her history and personal relationship with music, I was also interested in her perspective on the traditions involved in passing down music.

As a child growing up in the village today, she says the passing down of music is done in much the same way as it was when she was younger. The children are exposed often to music, and are always welcome to observe classes, and participate in ones especially for them. She says that much the same as when she was younger, the children want to learn about the music and without being forced by anyone, are motivated to learn the songs and dances by watching and miming. Even today she says, the traditions of her ancestors is passed on to the children in a structured way to ensure its survival. Lessons are held after school, run by one of the elders and open to anyone’s who is interested in joining. Here the boys and girls learn to play music and learn the songs and dance of their culture. During the funeral that we attended in Havga, the boys and girls even did a performance for the audiences. The girls did a traditional dance using stools and the boys did one as well. Because there are social structures in place such as the drop-in lessons after school, and the open invitation for children to observe and participate in the lessons for visitors, the music of this village will never be lost she says. The music never changes because it is sacred, and so there is respect to keep it as pure as when it was first composed.

As a child Angelina learned the same dances, and because so many people in the village and surrounding area, the risk of them being changed over time is very small. I asked her the role that music played in her life, and she said that it would be similar to everyone elses; music is a part of nearly all of their events, any social gathering, and daily life. She said that because the songs of their heritage are played so often, she feels very connected to them and the songs evoke happiness in herself and those around her. Dancing makes people happy, and she is no exception. The music and dance of their culture is something that is looked upon with pride. This can even be seen in the children who are interested in learning; there are no teens with attitudes thinking the songs are lame, they all want to learn the songs of their ancestors. Learning the music then seems to be something the children are driven to do to prove themselves, and they certainly hold the traditions of their village in high regard.