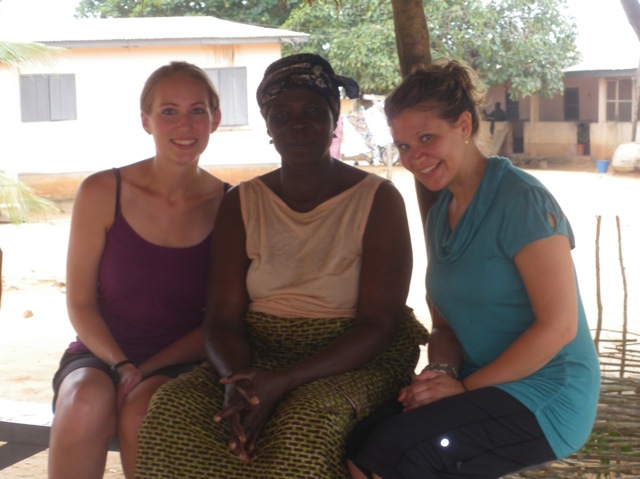 Name: Aku (Vena) Davor – Vena because she is the mother of twins (3 sets)
Gender: Female
Age: 62
Birthplace: Avenorpedo (nearby village to Dagbamete)
Place of Residence: Dagbamete since she was 10 years old
Education: None
Occupation: Trader. Buys farm products, processes, and then resells them.
Groups: Belongs to Unity, Akpoka, Atenuia, Singer, and the Shrine. She is a lead singer for these groups.


SHERRI: We’re with Michael Frishkopf for the University. And part of our course work is to interview people in the village about the music, and dancing, and the Shrine, as part of our course. So we were hoping to ask a few questions and hand it in as our assignment, and then it also is put on a website for other students to look at…


COURTNEY: And learn from.


SHERRI: and learn from.


COURTNEY: I want to start by asking, has music in Dagbamete changed since you were a small girl?


LEDZI: I will just tell exactly what she said. She said that it has changed. And one of the changes is, for now, there is more organization. It is more organized. And they have register of people in the dancing group and the music community. But in the past, there was nothing like that. That’s one change she said.


COURTNEY: Are there any other ways that it has changed? More Westernized?


LEDZI: She said for her, she hasn’t realized any change as with Westernization. Because they have formed up a unity, a unified, more unified dancing association and drumming association. That they even teach their young ones that comes up with it, so that is the defense for the change. So it doesn’t change much.


COURTNEY: How have your children learned music?


LEDZI: She said for those who are drummers, we call those who drum the Chief Drummers Zagoonohs [spelling?]. For those who are Zagoonohs, they invite the children who they find some kind of skill, drumming skill in them. They invite them and they teach them. And those who are Heynoos [spelling?], they are singers, they organize singing lesson. We call it Hakpa. It takes place at the most appropriate time of the day, which will not interrupt in your daily activities, like it takes part in the evening.


COURTNEY: What about for dancing then? How have your children learned the dancing?


LEDZI: She said the dancing they watch. When they are performing and the learn it from the…


COURTNEY: How have you been involved in music in Dagbamete?


LEDZI: She said she’s a singer. She said she sings, like a lead singer, at almost every drum piece in town.


SHERRI: So you’re involved with all the different groups that perform these?


COURTNEY: What kind of music do you like to listen to?


LEDZI: She says she enjoys the traditional music most?


COURTNEY: What can you tell us about the membership of the Shrine? People who are members?


LEDZI: Okay. She said being a member of the Shrine is always because of you need the protection, you need the shield. It protects them from temptations, and misfortunes, and accidents. And then business shield also. Like your business will be normally progressing, progressive and no intentional downfall of your business will work. So the Shrine has more power that protects them. That’s why they sing and praise Him, and that is the only way for them to applause the Shrine.


SHERRI: Are there a lot of members of the Shrine that are not from Dagbamete?


SHERRI: What brings them to the Shrine? The protection?


LEDZI: She says what brings the other people to the join the Shrine, is they heard comments, good comments about the Shrine from friends. Some are finding jobs that they can’t get, so they seek refuge from the Shrine, and you find you get the job. Some having business difficulties, and they seek refuge, and their problems are solved. Most of them are sick, and they come here and get healed, and then they become, it’s a choice, after you are healed, it’s a choice whether you join the Shrine. And then, some having problem with marriage and they come and seek solution in the Shrine. That many of things that are related to human life.


COURTNEY: How is the Shrine important to you?


LEDZI: She says the Shrine serves her in many ways. That’s why she knows how helpful the Shrine is and she keeps with the Shrine.


COURTNEY: How has the village, how has Dagbamete changed in the last 20 years?


LEDZI: She said for the past 20 years, the change is like increasing. If you compare Dagbamete to other villages, Dagbamete has changed. Like in terms of wealth. Because almost everybody in town is a member. So all other people who are not in town, who are from other villages they have seen that change. So, they are like a change in lots of people that they associate with. Because Dagbamete is full of all the Shrine members, Dagbamete has changed from other villages significant. Formerly, a lot of buildings were not like painted and others and people’s job changed. People seek good jobs and they get, provided that you are keeping the rules of the Shrine.


COURTNEY: Do you know when the Shrine was built here?


COURTNEY: Do you remember what it was like in the village before the Shrine was here?


SHERRI: Maybe her parents have told her.


LEDZI: She said the town was very small, like a cottage. Countable number of people. She say the buildings were not up to even ten. And they are all thatch roofs and like, dilapidated nature houses.


COURTNEY: So do you think that the Shrine brought more people to the village?


LEDZI: She said yes. She said it is the Shrine that makes them to reproduce more.


[Short conversation about this.]


SHERRI: What has the effect of the Kathy Armstrong Lodge and West African culture exchange been on the village?


LEDZI: She says she pointed that out once, but not specifically. It’s a part of the work of the Shrine because the Shrine has graced on Kwasi’s work. And when the people from outside Ghana, like Canada and Western and other places come here to learn drums, it is a top story all over. So that’s increased the image of the village.


SHERRI: So it’s been positive.


SHERRI: Even with the younger people going away to work in urban areas and big cities, do they still come back to the village because of the Shrine, and the music, and the family. Why do they come back to Dagbamete?


LEDZI: She say they come back because of the Shrine, because they need a sacrifice or prayers, and things to do, so they come back to the Shrine. Always on Sundays though. But not every Sunday. When you come one Sunday, you can be like [indecipherable].
You have to come here at festival time. Lots of people.

We had the privilege of sitting down for an interview with Aku (Vena) Davor. To us, she was introduced as Vena, given this name because Vena means mother of twins, and Vena has had three sets of twins in her life. Vena is a high priestess in the village, is very involved with the shrine, and therefore we felt fortunate to have the opportunity to speak with her about music in Dagbamete and the shrine. Since Vena does not speak English, Ledzi Agudzemegah joined us to assist in translation.

Vena, sixty-two years old, was born in Aven?pedo, a nearby village to Dagbamete. She moved to Dagbamete when she was ten. Since Vena has lived in the village for fifty-two years, our first question for her was on how music has changed in Dagbamete since she was a small girl. She feels that the music has changed by becoming more organized. The dance groups and music community [drumming] now have a register of members. Previously this did not exist. She also feels that music hasn't changed as a result of Western influences. She credits this to the fact that, "they have formed up a…more unified dancing association and drumming association. That they even teach their young ones…so that is the defense for the change."


As music teachers, we were very curious to find out how children in Dagbamete learn music. Vena explained that Chief Drummers in the village will invite children who demonstrate drumming skills to learn from them. Singers may organize singing lessons, which in Ewe are called Hakpa. These usually take place in the evening so as not to interrupt their daily activities. In contrast, dancing is not taught, but rather learned by observing performances, funerals, and recreational events. Vena herself is a singer. She sings as a lead singer for almost every drum piece in town, and is involved with many different groups. When listening to music, Vena enjoys traditional music most.


As a high priestess of the shrine, Vena has an significant role in its rituals. She was able to give us insight into the importance of shrine music, revealing that it is important "because it's shrine music. Sometimes it is needed for worship, sometimes it's needed for praises." People become members of the shrine because of the protection that it gives. "It protects them from temptations, and misfortunes, and accidents." Music and dance are used as a way to praise the gods. Many members of the shrine are not from Dagbamete. "What brings the other people to join the shrine, is they heard comments, good comments about the shrine from friends. Some are finding jobs that they can't get, so they seek refuge from the shrine, and you find you get the job. Some [are] having business difficulties, and they seek refuge, and their problems are solved. Most of them are sick, and they come here and get healed, and then…after you are healed, it's a choice whether you join the shrine. And then, some [have] problems with marriage and they come and seek solution in the shrine…things that are related to human life." The shrine serves Vena in many ways. She knows how helpful the shrine is and so she keeps with the shrine. Even though some younger people leave Dagbamete for urban areas like Tema and Accra, Vena says "they come back because of the shrine; because they need a sacrifice or prayers…so they come back to the shrine."


In her eyes, Dagbamete has changed significantly in the past twenty years. Again, she credits this to the shrine "because almost everybody in town is a member." Dagbamete has changed from other villages in terms of wealth, jobs, and aesthetics. "Formerly, a lot of buildings were not painted… and people's jobs changed. People seek good jobs and they get [them], provided that you are keeping the rules of the shrine." Previous to the shrine's establishment in 1952, the town was "very small- like a cottage. The buildings were not up to even ten, and they [were] all thatch roofs and dilapidated." She also credits the shrine for increased reproduction in the village--and as the mother of three sets of twins, she would know what she is talking about!


The effects of the shrine have touched others in the village as well. The shrine graced on Kwasi's work (the Kathy Armstrong Lodge and West African Culture Exchange). Sites like this bring people in 'from outside Ghana, like Canada...and other places.' When they come 'to learn drums, it is a top story all over, so that's increased the image of the village.' Vena views these foreign visits to Dagbamete as being positive, and even invited us to return at festival time.


Interviewed by Courtney Flett and Sherri Twarog, Summer 2010
Back to interview listing