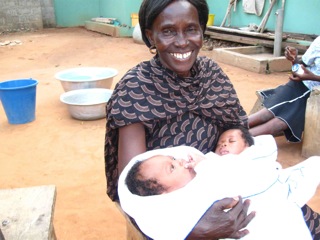 Sitting with Ablayo Dunyo, I had the chance to learn about changes in the village in the realm of its music and its aesthetics. Since Ablayo does not speak English, her son Mawupemo joined us to act as an interpreter.
Ablayo was born in Dagbamete and continues to live there. I asked if she had noticed much change in the village from when she was a child. “There has been a great change” she said. Roads have been built where once there were small, narrow paths, electricity has replaced the need for kerosene lanterns, and water is now pipe-born making trips to the well unnecessary. Schools too have changed. Previously, they were made of some wood or classes were even held under a nothing but a tree. Now, there is a schoolhouse. I also learned about the installation of KVIP (Kumasi Ventilated-Improved Pit). These are the toilet houses that were an upgrade from the small holes and boards that once were used.
The music too has gone through changes. At one time, there was a declining interest in the traditional music. Ablayo feels that this was because of the appeal the Christian Church had for the youth. When the youth converted to Christianity, “they forgot about tradition...the youth didn’t pay attention to our tradition any longer.” However, they “realized they were being mislead...and they are now following the traditions [again].” After that, the interest in traditional music returned.
To be sure the interest in traditional music does not see another decline, the youth in the village are passed the baton of traditional music. “Traditional music, in this community, is passed onto the younger ones by way of witness.” She went on to explain that “there’s no specific place whereby you go to be taught this and that: this is how things are done.” Instead, “whenever the younger ones hear drumming, they will go and watch.” “As they visit, they see the way music goes on, the way tradition goes on. As they grow, the more you keep [seeing] and the more you learn.” By getting involved, the music is passed on from generation to generation. One of the places where the youth will “witness” the traditional music is in the Shrine. Ablayo, a member of the Apetorku Shrine, feels that music is used at the Shrine not only to invoke the Spirits, but also for dancing. “[As] they dance and they get strength and energy.” Ablayo prefers traditional and recreational music over other genres. As a member of many groups and ensembles, this is where she hears the music. It is because she likes the music that she is a member of these groups. “If I didn’t like it, I wouldn’t do it,” she stated. “When you understand some [style] of music, that is the [type of music] that you will follow.” Since Ablayo has seen many changes in Dagbamete, I wondered what she thought about the effect of technology. She feels that technology has brought a lot of advantages to the community. The radio can provide music for entertainment, and the TV allows you “to know what is going on in the world.” Technology, like recorders, allows for records to be kept and passed on. Overall, she feels it has had a tremendous positive effect in Dagbamete, and on their lives.
Other positive developments in the village may be due to the Kathy Armstrong Lodge and West African Cultural Exchange (WACE). Previous to the lodge’s construction, people lived in small, mud houses with their families. These organizations have brought other improvements to infrastructure such as schools. People from other countries come to visit and learn because they enjoy the experience. This benefits the village. Ablayo hopes it will continue in the same manner, leading to the construction of more buildings and structures. Ablayo does not worry about the effect Western influences could have on the traditions of Dagbamete. “We are used to our tradition, and that is your tradition. So, if you bring yours, it’s like an exchange of music and tradition” she stated. Because of the villages strong roots in tradition, there is no threat of changing it. “That will only happen when you do not know where you are coming from” she explained. “We are learning together and we are learning from each other. “