The aim of Virtual Sonic Architecture is to enable collective immersive multisensory experience of architectural history, for aesthetic pleasure, intercultural understanding, and educational use. In this particular case, Hadim Ibrahim Pasha mosque, the objective is to experience Ottoman Turkish culture, creating a powerful visual-aural-social experience for a more humanistic appreciation of Islam, its civilization, and its rich history.

Hadım Ibrahim Paşa (“Ibrahim Pasha the Eunuch”) was a 16th-century Ottoman statesman from the Ottoman Sanjak (province) of Bosnia. The chief white eunuch and guardian of the imperial palace under Süleyman the Magnificent, he served successively as governor-general of Anatolia, fourth vizier, second vizier, and lieutenant-governor of Istanbul. His eponymous 16th-century mosque, located in the Silivrikapi neighborhood of Istanbul, was constructed by the celebrated Mimar Sinan (1490 – 1588), chief architect (“mimar”) for three Ottoman Sultans: Süleyman, Selim II, and Murad III. Sinan’s buildings dominate Istanbul today, especially the magnificent Süleymaniye Mosque (see Figure 1). Recently renovated, the Hadım İbrahim Paşa mosque (see Figure 2) still stands today, more or less as it was when completed in 1551. Its soundscape however has been radically altered. How can we immersively experience the original mosque, visually and sonically? 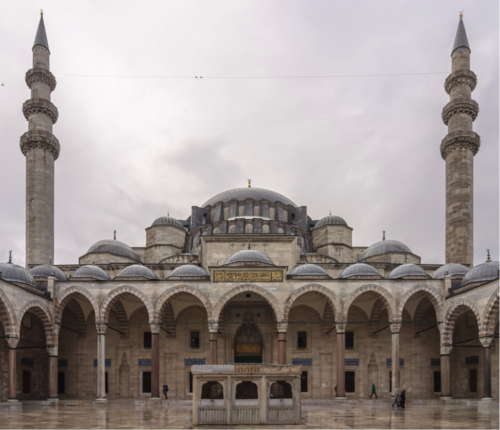 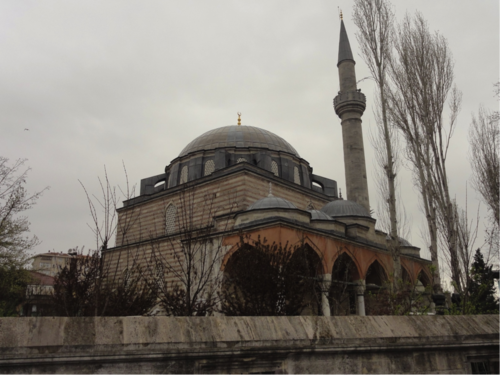 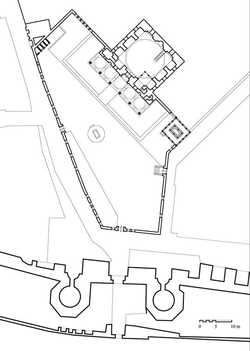 How can we hear the original mosque? We draw on research by Associate Professor Nina Ergin (Koç University, Istanbul, and member of our SSHRC team), from her chapter: “A Sound Status among the Ottoman Elite: Architectural Patrons of 16th-Century Istanbul Mosques and Their Recitation Programs,” to appear in Music, Sound, and Architecture in Islam, edited by M. Frishkopf and F. Spinetti (University of Texas Press, in press).

In her research, Professor Ergin demonstrates the particular social importance of soundscape in relation to architecture, as well as clues to its character. The size of an Ottoman mosque, and in particular the number of and arrangement of domes, was thought to index social status. Thus a vizier could not construct a mosque of a size and layout thought to rival a mosque of the royal family.

Hadım Ibrahim Pasha’s decorous mosque consists of a single 12-meter dome on a cubical base, a relatively modest size conforming to the rank of its patron. Yet, by employing a large number of reciters (55) he was perhaps able to use sound to transcend the status indexed by mosque size.

Some screen shots follow, depicting the mosque model inside and outside, at different times of day. A video will soon be available, and after that the online game itself - stay tuned! 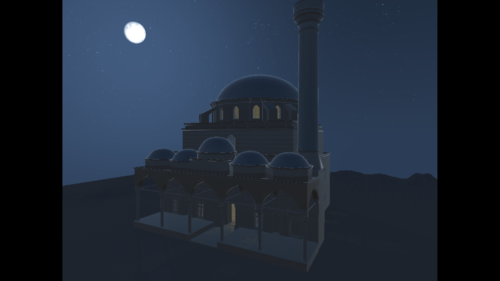 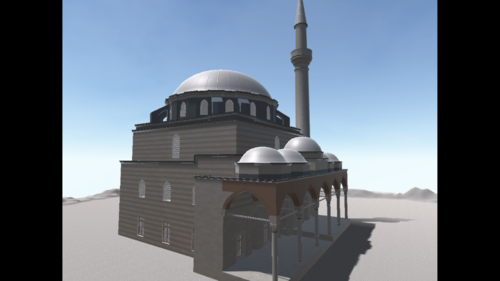 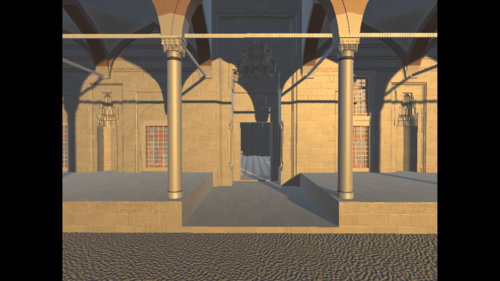 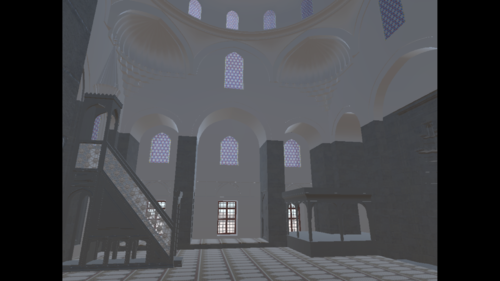 Please note: this Unity-based system is still under development. If you try it, please be patient and take notes on its performance for feedback, so we can improve it.

Download here (warning: it's a large zip file (> 1 GB); unzip and run the Mac or Win version, as appropriate). Whoever runs simultaneously should appear together in the system. The first person "in" will be able to control the system clock (which can be set to run faster or slower than real time); others will have to follow. You'll see each others' avatars as colored spheres

Suggestions and notes: Wander into the mosque in the evening to hear various Qur'anic passages being recited, sometimes simultaneously. The adhan emanates from the top of the minaret five times daily. You can fly (there's no gravity); try zooming around the mosque from all sides. The time zone is Edmonton, AB (Mountain Time). Sun and moon follow correct astronomical tables. Weather effects are somewhat random. Note the "green flash" at dawn.

This model runs in your browser, using Mozilla's Hubs, without requiring any download, though it lacks some of the features of the abovementioned version:

Reference: “A Sound Status among the Ottoman Elite: Architectural Patrons of 16th-Century Istanbul Mosques and Their Recitation Programs,” in Music, Sound, and Architecture in Islam, edited by M. Frishkopf and F. Spinetti (University of Texas Press, 2018).