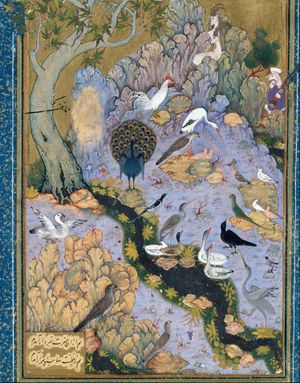 Overview of the Garden, with original music from "Sounding the Garden", Valley of the Quest. [1]

The famous Persian poem of Farid al-Din ʾAttar of Nishapur (1145-1220), "Conference of the Birds" (Mantiq al-Tayr, literally "language of the birds", cf Qur'an 27:16), recounts the birds' spiritual quest through seven metaphorical valleys -- spiritual stations -- in search of the mythical Simurgh.

These valleys have been mapped onto the Aga Khan Garden at the University of Alberta's Botanic Garden, augmented with music, poetry, and birdsong, using a location-aware app, in order to deepen visitors' experiences of the Garden, to catalyze a richer, fuller, more harmonious understanding of Islamic spirituality, and to foster religious pluralism. A non-location-aware version is also available, which can be used anywhere.

See mapping of valleys to garden here. For each valley, we have recorded original music, within the Persian musical mode (dastgah) associated with the valley's spiritual ethos. Each valley is introduced by a text, including poetry (recited in Persian and English translation), followed by a brief description of the valley.

In Augmented Reality (AR) mode, Sounding the Garden provides an additional aural dimension, adding layers of music, bird calls, poetry, and narration. Through your mobile computing device (phone or tablet) you can hear an augmented reality - a new soundscape, comprised of music, speech, and birdsong -- superimposed on the garden, through the frame of a famous mystical poem, Farid al-Din Attar’s “Language of the Birds” (Mantiq al-Tayr). As you stroll through the garden you will hear different sounds through your phone or tablet, varying with your current position, time of day, day of the week, and month of the year, whose sources are virtual. Such sound is known as “acousmatic” - it is not directly coupled with your physical environment, and its “sources” are hidden from view.

The fully Virtual Reality (VR) mode is a composite of the real (visual) garden plus AR audio, superimposing the the two, and allowing you to freely navigate while listening, from any location on earth. (It also contains some surprises not available in the "real" garden!)

May your journey enrich you!

We have also developed a prototype fully virtual model of the visual garden plus the above augmented reality audio layer.

Try it out in your browser! The screen comes up with instructions. To get started, click "return", then click "explore. Use WASD keys to move forward/left/back/right (standard for gamers!) and use the mouse to change direction. Hit escape to pop out.

(Ignore the yellow error on startup.)

This video gives you an idea of what to expect.