On Friday March 16, 2012 – the Intermedia Research Studio at the University of Alberta played host to a lively and engaging symposium on Music. The title, Sounds Like Theory was inspired by the Nirvana album title with a similar cadence. Sounds Like Theory refers to synesthesia, as a way to refer to the multiple ways that cognition and neural functions can experience and express diversity, hence, theory, or, the theoretical, becomes about the ways in which music can be used as a catalyst to expanded brain function, and conceptual motifs that extend beyond the textual landscape of academia.

Three speakers enlightened the engaged audience with their unique approaches to the ways in which music and sound plays a central role in their own research. The afternoon began with Sundar and his captivating presentation on his concept of the four sided guitar. Sundar walked us through a minor history of the guitar while arguing for a non-rock-non-blues approach to the guitar. Avoiding entrenched tropes of the guitar Sundar coaxed curious sounds out of his hollow-bodied subjects.

Second speaker, Mickey Vallee, offered his personal brand of tour de force lecture outlining his upcoming book project. Dropping musical references like well punctuated poetry the 1960’s came alive in the room. The upcoming book will offer vignettes of popular music relationships to psychoanalysis and cultural studies throughout the later half of the last century.

Our final speaker was Mark Hannesson, GO TO THE AGA NOW to experience the sound/mythical cultural room created by Mark and Gabe Wong. Mark gave us an illuminating talk on the computerized, tactical, and technical side of creating an installation that must survice a daily parade of school children and Art Gallery Patrons for an entire year. Simply put, the restraints and demands of such an undertaking press the artist/academic/technician to new heights of critical art methods.

In conclusion, we would like to add that we had video-recorded the sessions with the intent of posting them here for you to view. However, and the irony is not lost on us, the audio failed to capture. Thus, there are hours of silent footage on Sounds Like Theory.

Paul Datta and I would like to express our gratitude and thanks to all who participated, as audience members, as presenters, as organizers.

We look forward to next year’s Intermedia Symposium. 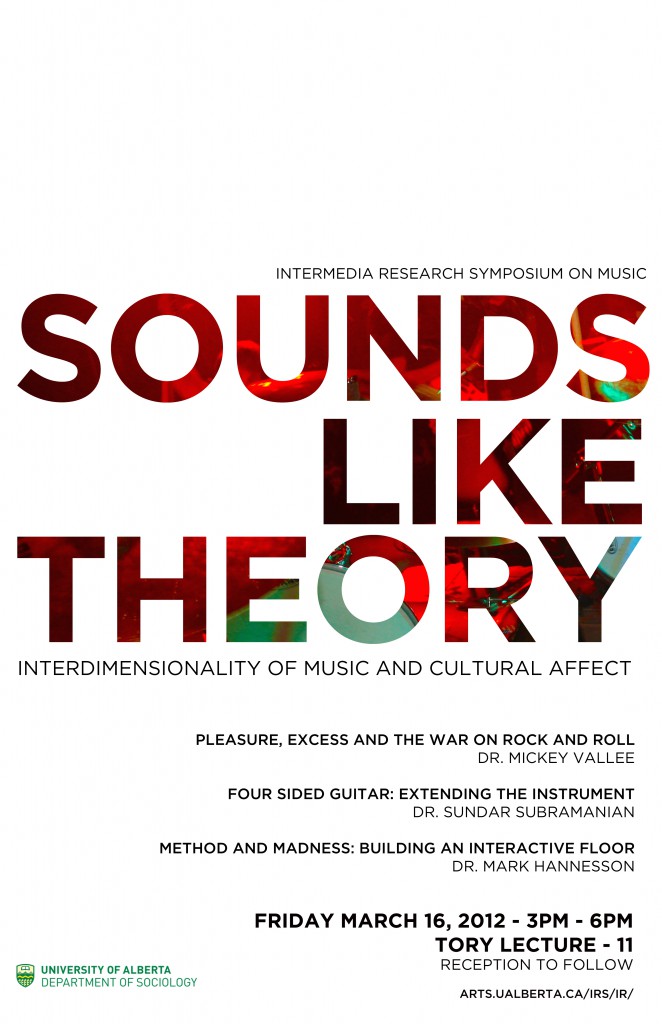 Mickey Vallee – Pleasure, Excess, and the War on Rock and Roll.

The rancid aphrodisiac of cretinous goons: Pleasure, excess, and the war on rock and roll

Rock and roll was no stranger to governmental legislation and moral intervention. But, as rock historians repeatedly argue, such interventions are embedded in the social stratification ordered by the discrimination of race, ethnicity, gender, and sexuality – symptoms which serve as opportunities for facilitating progressive social change. Such a logic pervades popular music studies. This presentation will suggest it is time for a Zizekian intervention to rewrite the history of rock and roll in favour of seeing the marginal rise of rock and roll along with its moral backlash as a necessary historical constituent of consumer society. Namely, this presentation explores the unfathomable satisfaction derived from submission to the symptom, namely the inevitable suffering and guilt expedited by one’s inability to achieve satisfaction (i.e. “I can’t get no …”).

BIO: Mickey received his doctorate in sociology and music at the University of Alberta where he currently teaches courses in cultural studies and popular music. He has published his research on phonographs, mashups, pianos, and nostalgia in The Journal of Historical Sociology, Popular Music and Society, Australasian Canadian Studies, and the edited anthology, Ecologies of Affect. He is currently writing a book on popular music and morality under contract with Continuum International and is co-editor of Demystifying Deleuze: An Introductory Assemblage of Crucial Concepts (Red Quill Books). Mickey will be taking up a new post as assistant professor of sociology at the University of Lethbridge in July. 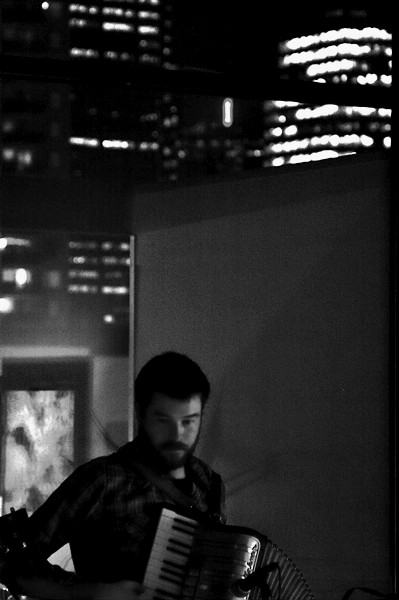 The guitar is ubiquitous in our culture. We have seen fantastic displays of
virtuosity, been exposed to a tremendous range of timbres derived from processing the
instrument’s electric signals, even seen the instrument smashed to pieces or set on fire.
One might question whether anything new can be done with the instrument. With my
dissertation composition Four-Sided Guitar, I have made efforts to begin to attempt to
answer this question.
In each movement of Four-Sided Guitar, I have approached the guitar in a
radically different way. The first movement is a traditionally notated sonata-allegro for
nylon-stringed classical guitar. The second is a rondo for prepared electric guitar that
features a range of extended techniques that I have developed over years of writing and
improvising prepared guitar music – preparing harmonics on the strings with an art
eraser, scraping strings with a file, creating chain reactions by e.g. resting a file on the
strings and stroking the file with a slide, pouring water into a bowl resting on guitar
strings, etc. Next, we find a minuet and trio in the third movement. This movement is,
however, also an entirely digital work on fixed media created with classical guitar
samples that draws on recent popular dance styles, particularly early techno and house.
To conclude, the fourth movement is a rondo for electric guitar with live signal
processing in the Max for Live software environment, some of which I programmed
myself with the visual programming language Max/MSP. I show in this movement that
the processed electric guitar can in fact be a very subtle instrument!
My presentation will focus on the latter three movements, discussing my
technical innovations with preparations, sampling, and signal processing.

BIO
Dr Sundar Subramanian  lectures in music theory, popular music, and music history at University of Regina. He completed his PhD in music (composition) at University at
Buffalo (SUNY) in 2011. He completed his undergraduate studies at Carleton University
in Ottawa and his MA in composition at York University in Toronto.
While his dissertation project is a large-scale work for solo guitar, incorporating
preparations and laptop processing, Dr Subramanian’s compositional interests are
wide-ranging, encompassing electronic music, solo works, and chamber music. He is
fascinated by rigorously theoretical, strictly notated writing as well as by highly open
improvisation. Dr Subramanian has had compositions performed at numerous venues in
North America by performers including the Madawaska String Quartet, Arraymusic, Seth
Josel, Christina Petrowska-Quilico, David Mott, and William Beauvais. In 2008, his string
quartet Diminished but Returning received honourable mention in the competition for the
Brian M. Israel Prize for young composers residing in New York State.
Sundar Subramanian has performed as an electric guitarist and improviser at a
number of concerts and festivals, including the Extensible Electric Guitar festival at Clark
University and the Society of American Music conference in 2005. He also performed in
the premiere of Glenn Branca’s 13th symphony in 2001.
His research interests include the mathematical modelling of
pitch in post-tonal music and the analysis of popular music. His analysis of Reginald
Smith Brindle’s El Polifemo de Oro has been published in Ex Tempore: A Journal of
Compositional and Theoretical Research. He spoke at the 2009 conference of the
International Association for the Study of Popular Music in Liverpool UK, presenting an
analysis of “Close to the Edge” by Yes. 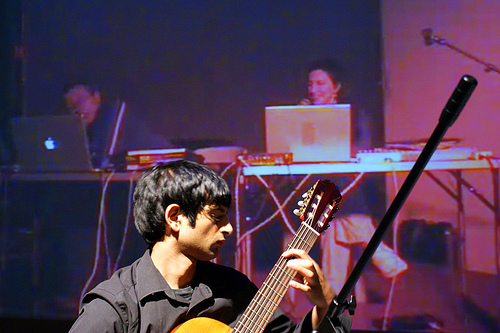 In November 2011 artist Gabe Wong asked me if I was interested in working on a project for the children’s room of the Art Gallery of Alberta opening in February 2012.  The project titled, Method and Madness, would run for a year (February 2012 to January 2013).  Gabe wanted the floor of a stage covered in 22” x 22” tiles to be made interactive.

In coming up with the design for the interaction, we looked at several possibilities including computer vision (both with standard cameras and with the Kinect) piezo discs, and FSRs (Force Sensing Resistors).

In this talk I will look at the process of designing the project.  The decisions that were made and how the eventual problems with the design were overcome.